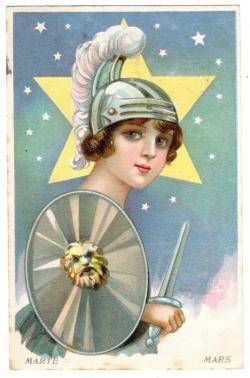 Personally, my Mars is broken in Libra. Mars shows how you get what you want. It shows how you hunt, how you get the man/woman and also how you take out an enemy. The problem with Mars in Libra is that Libra is nice. Libra is not actually any nicer than anyone else but they do have to act as if they are. This is their job on the planet.

This means I may want to hit you with a bat but the second I think it I realize that these are not “nice” things to do. Since I’m not allowed to disturb the peace, that plate does not crash down on top of your head – which I regret!

The result of all this? Well no one is that nice, so when Libra blows – look out.

Mars is well placed in Aries, the sign it rules and the sign opposite Libra. Aries Mars throws the first punch. Everyone knows that gives a clear advantage. Aries knows instinctively, “nice” is incongruous with war. Libra Mars wants to discuss the unpleasantness over dinner – Aries is going to have Libra for dinner.

Worse, if Libra does manage to strike it can only use the same amount of force that has been used against them…and probably just a slight bit less. The reason is that Libra must balance everything. You hit me with force of 10, and I hit back with force of 9.8.Because this way, I’m the nice one. See how ridiculous this is?

Mars is also very well placed in Scorpio. Where Aries is overt (that’s their fist smashing into your face), an enemy with a Scorpio Mars will subtly dismantle you from the inside out using elaborate covert techniques. Where Aries will kick your ass in two seconds, a Scorpio Mars is much more insidious.

Scorpio has the poker face in the zodiac. They will lie in wait or perhaps slowly undermine you in a myriad of ways. Many of these will be psychological, Scorpio’s natural playground. Undercover cop? That’s a Scorpio Mars technique. You don’t know what’s happening until you’re in the bag.

The exalted placement for Mars is Capricorn. This is because Capricorn is goal-oriented and tenacious as hell. It just doesn’t quit until its goal is achieved. It’s a cautious planner who acts with integrity and so is nearly unbeatable. Think “controlled force.” They plan and have covered both their ass and anything your ass can possibly think of before they launch an attack. Further, they will keep going bumped, bruised, bloody, or whatever until victory is achieved.

Rash-acting Aries Mars can get in trouble when they punch a black-belt in karate on impulse because they did not take the time to size up the foe. Scorpio Mars can get in trouble when the psych games turn on them, and the cat becomes the mouse. Capricorn Mars is the creme de la creme. If you want to come out on top, you might pretend you have one.