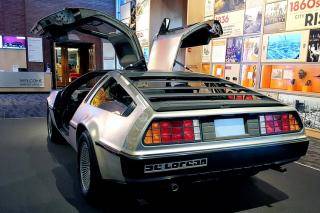 Mars in Scorpio is opposing Uranus in Taurus. Among other things, this describe fights on the internet. Personally, I’ve been battling technology. I want this site to be fast and I’ve been pushing for that. It’s been pretty mild for me, but I don’t have planets in the early degrees of the Fixed signs.

The exact aspect has passed. I have not seen the dire predictions play out. I have noticed that my consultations have been pointed.  I don’t think this is bad. I am hired because I’m keen and what I have seen more than anything else, is people pushing (or being pushed) towards liberation.

It’s interesting because Venus ruled Taurus is associated with art.  I don’t know anyone who isn’t sick to death with the lack of innovation in artistic fields.  Remakes, copies, formulas… it’s disgusting.

I just watched a documentary on John Delorean. He was a tragic figure when it was all said and done but he was a true innovator when he took over the Pontiac division and came up with the GTO.

He’s a great example of creative, raw male energy. He’s asserted himself (Mars) and his individual tastes (Uranus in Taurus).

Not everyone is designed to lead but there are many out there with the ability and they won’t do it. They just won’t take a risk.

That’s what I recommend at this time.  It a personal (Mars) revolution (Uranus).

I saw a Lexus today that looked like a Kia.  Are you kidding me?

Do you have an impulse to break free?