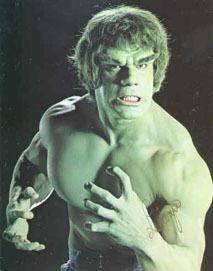 And violence erupted a second time today, this time I was in my car. I was in the middle lane, three lanes of traffic going in the same direction. There was a Suburban in front of me, trying to change lanes, his right turn signal. He was slowing, so I hit my brakes to allow him space to get over, which he did and after than, I don’t know what happened.

All the sudden, the Suburban pulled back into the center lane, my lane, stopping on a diagonal, completely blocking the lane. Next thing I know this guy is out of this Suburban like this is a movie or something.

He looked big and he was swearing and stuff… at a car in left lane, other side of my car.

Can you see this? I am parked… blocked in on all sides. There is a giant standing in front of my car, right at the bumper. He was not Lou Ferrigno but he was akin to that, with his steroid forehead prominent and me?

Well having Libra so I have to pick a side and the side I have to pick is the weaker one so I can balance. So I immediately decide to defend the guy in the red car. You know. I am going to help the other people pull this big guy off because I am not going to have someone beat someone to death on the hood of my car.

But then the guy in the red car gets out and get this: He’s this smallish Asian man who looks like he just got his hair done because it’s just as slick and trick as it can be guess what? He is not going to take any crap off this dude.

“YOU TRYIN’ TO START SOMETHIN’ WITH ME?'”

The Asian guy said looking very good and ready to fight to the death. And at that, I almost laughed. Because this other guy was huge. He was ENORMO. But the Asian guy was meeeeean. So at that point I decided it was okay if they wanted to fight. I mean, what the hell? Go ahead and fight each other and the rest of us will just wait while you do and after you’re done I’ll clean the blood off my car. But that didn’t happen. They backed each other down and we all went on our way.