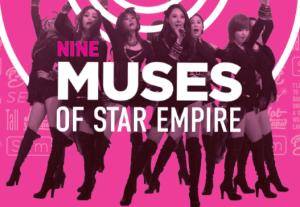 We used to watch the K-Pop girl groups when my son was that age. My husband admired them. He thought they were more accomplished than their American equivalents.

I was cruising Netflix and came across a documentary, 9 Muses of Star Empire. I love dance, though I have no skills myself. I read and watch everything I can on the topic.

I particularly like documentaries about the struggles and various machinations that occur behind-the-scenes in order to make what happens on stage. I’m partial to ballet but enjoy all forms of creative dance.

I thought I’d really enjoy this program. Turned out, I could barely get through it.

I’ve written before, I dislike the machined art we see today.  It’s not person’s voice, it’s their voice manipulated by computer. That was the problem with this group. These girls are essentially trained to be walking, talking, dancing, speaking, sex dolls.  You watch them be stripped of their humanness, as the program progresses.

I eventually turned it off. I’d seen enough, but then my husband came in and he was curious so I turned it back on.  I was 2/3 through the program. At this point the girls were depressed. They were morose.

The men training them had similar depressed expressions on their faces. “Everyone involved with this looks like that,” I explained to my husband.

He thought it might be usual, but I don’t think it is.  “This is not as hard as ballet,” I said. “I’ve seen German ballerinas train, Japanese ballet…really, ballet all around the world. Their bodies are beat up way beyond what these girls are going through and you never see this kind of moroseness. They’re there because they want to be there. These girls look like they’d rather die…”

Ultimately (and not necessarily correctly), I blamed this on the men training the girls. I can’t say for sure it’s the culture. I think it may be that the intended goal of the training is what sucks the life out of the girls.  The goal of ballet is not to manipulate and titillate men.

It may be that when you take a woman, anywhere and mark her value in line to how a generic male responds to her, she’s going to fold in on herself.

Women are not meant to be sex dolls, but it seems many of them are trying to become this. It’s so against nature.

I think these things I write about now, will come to light with Pluto in Aquarius.  The shadow side of technology.  Sex (Pluto) robots (Aquarius).

It’s shocking to me, some girls are convinced they’re best off if they can look like a plastic doll.  What good is that, really?

Your thoughts on this topic?