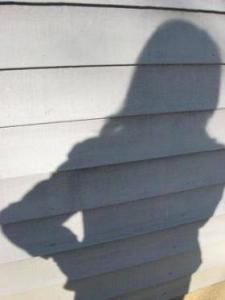 Do you live in another person’s shadow?  How about the shadow of your family or your parents?

There are a number of ways you can be trained to this but speaking from personal experience, it’s a common phenomena for younger siblings. I lived in my sister’s shadow for many years. I think I would still be living there, had I not broken contact with her, and separated myself for eight years.  During this time I became my own person, as opposed to being defined in relation to her.  This was not fault. She was just dominant; there is no other way to say it.

Astrologically, this can be seen in my chart in a number of ways.  I have a packed 8th house (shadow) and Venus square Neptune in my chart which just loves to sacrifice.  Neptune on the midheaven would blur the boundaries in my family life, making it almost unnatural to distinguish myself from my family.

I broaching this because I see my son living in the shadow of his best friend who fifteen months older than he is. Prior to this, he lived in his sister’s shadow, but I think this is the year he’s going to pull out.  Saturn will oppose his natal Sun Saturn conjunction so the timing is right.

Do you live in another person’s shadow?