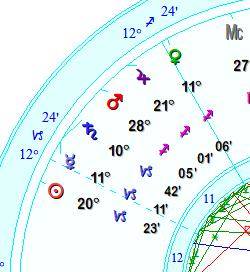 The moon is in Aries today, squaring the sun, Mercury and Mars in Cancer and Saturn and Pluto in Capricorn.  Libra fills in the complete the circuit.  If you planets in Libra like I do, I bet you’re feeling a bit “contained” and yes. That’s an understatement.

I woke this morning, to the news that one of my clients, who was also a friend, was found dead in his home.  This was out of the blue sky.

Now Libra likes to sort of float along, prettily, in a party dress or some other attractive garb. It’s an AIR sign!  I’m sure you can see how this must have hit me.  Bam! Stopped me dead in my tracks. It’s just so heavy.

The friend has a sister he’s close to. I’m sure she’s devastated. He’s also got friends and the people who work with him, love him. In fact, it was one of them who contacted me.

It’s truly rare to meet someone who is universally liked and respected. This man was like that. I mean, it was truly, truly an honor to know him and work with him. His passing knocked me down at the knee-level which is appropriate for Capricorn / Saturn.

That’s his chart pictured.  Transiting Saturn and Pluto surround his sun, but beyond that, this was essentially is Jupiter and his Saturn return.  I really can’t believe he’s gone. I know he would approve of this post.

RIP Charlie, a Capricorn with a stellar reputation.