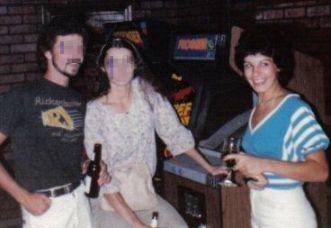 Catch up here: Leon and His Ex-Wife: Scorpio Energy Deluxe

Leon and his ex lived several hours apart so although they didn’t see each other, they spent a lot of time on the phone. Emotionally sophisticated Leon knew she needed someone to talk to and he also knew she was not looking for anything else. No dick! I asked him how he felt about that.

“Oh, I don’t really mind,” he said. “I’d give it to her if that’s what she wanted but you know… she’s all Christian now. She teaches Sunday school and stuff. She’s really steeped in that, which is good. It’s helping her out at the moment. I think it’s good for her. And though I can’t say I’d mind getting laid, it’s probably just as well we don’t sleep together…”

And so they didn’t. And when the holidays rolled around, this would have been 2005, he took her out on New Years Eve so she wouldn’t be alone. It was really sweet. He took her to a concert that we all used to go to every New Years Eve, back in the day. We had terrific fun each year, so they got a thrill, reliving these days and I got a vicarious one.

I was terrifically curious. I love this woman; it’s just the way I am. If I ever loved you, I guarantee you I still do.

“She’s looks great. She looks great, actually. I don’t think she could have aged any better,” he said.

They stayed in separate hotel rooms and she went home and she continued to call him at least daily, where several times a day was more typical. She was confiding in him. Blowing off steam.

It seems her two sons were high maintenance. It was as if their father treated her poorly and when he died, they took up where he left off. Leon and I felt hurt by this. We both wished things were not so hard for her. It was amazing how much we both still cared and Leon kept his energy under her in a steady way, while I kept my energy under him.

“It’s good you do this. She’s very lucky. You are a great ex-husband, maaan.”

So now it’s been about a year and half. I haven’t asked about her in about 3 months. I talk to Leon fairly frequently but he’s known for hating to talk on the phone so our conversations are always brief and it just hasn’t come up. But last night, I asked:

“I don’t know. She quit talking to me,” he said. He sounded pretty even, emotionally. He sounded matter of fact.

“I’m not sure. She sort of starting dropping off there. I was hearing from her less and less, so I called and left her a message. I was needling her a little. You know. Like I do. Not a lot but a little. So I did that and I guess she didn’t like it because she never called me back.”

“Well that’s why, Leon. She always dumps her friends when she gets a man.”

“Yep. She met that prick and you know how close we were. But when she met him… well I went out with them one night, just for a couple of hours. And I have no idea what happened. I don’t know what I did but the next day she called me and asked me not to call her anymore. She said he didn’t like me and he making her choose between me and him. She literally said that… he told her this specifically and she told me she loved him and was choosing him.”

“Yeah. So this is what she does. She leans on you hard. She likes to have friends, but then finds a man and bam! You’re out of here. And I bet you anything this new guy is a prick too. Why else do you need to get rid of your friends? I bet you anything she’s lined up and going to go around again. Same movie. Dump your friends and get stuck with a prick.”

“Yep. Sorry to say. Tell you the truth I think she’d have fared better with us for friends. So what else is going on? How are you? How is…”

I asked about my summer fling from 25 years ago. The guy in the romp, “A Jupiter Story For Y’all“. He was Leon’s friend, that’s how we met.

“All right then. She’s made her exit, but the rest of us are still here and I’m sure she’ll be back in another 20,” I said.

Have you ever dumped a friend for “love”?

pictured… that’s the three of us back in the day. I have to blur their faces per his request, but I think you can see the energy…