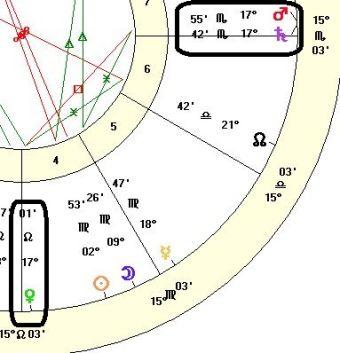 Venus in Leo will square Mars and Saturn in Scorpio, August 25th-27th.

While Mars Saturn has a (well deserved) bad reputation in astrology, energy is neutral until directed.

In this case, Mars is in its home sign, Scorpio. With the planet conjunct Saturn, it’s possible to direct your energy in a effective, disciplined way.

Now this is for good or ill. You may want to hunt (Mars) a love affair (Venus in Leo). But there are many other possibilities and some of them are sinister.

For example, this harsh energy could be directed towards a child (Leo).   I hate to worry people, but take particular care to guard (Mars Saturn) your girls (Venus) the last week of August.

Saturn is associated with karma. Some will suffer rejection and/or be acutely aware of the lack of love in their lives. It’s times like this that make a person work on the issues that dog them in relationships.

I know that many don’t know where to start with that, so I created these classes to help them. They are specifically designed to jump-start progress. If you hurt bad enough that you’re ready to invest in solving your problems, I would start with this: Finding Love With Astrology.

Then if you want to know more or if your issues are Venus-Saturn themed, I’d get a transcript of this workshop – Finding Your True Love & Soulmate. Both courses together cost less then one hour of therapy. I don’t think you can go wrong.

On the high side, anyone who has disciplined themselves (Mars Saturn) and been committed to doing the right thing in their relationships (Venus) will probably get a benefit at this time.