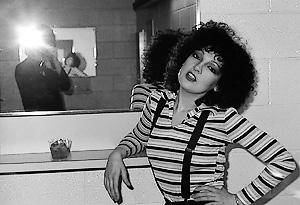 I love the gal in this video –  Karla Devito. She’s Gemini with her sun conjunct Jupiter. She sings of being “doubly blessed”if you can believe that.

She also has Mars in Gemini (a Mars Mercury exchange). She has Mercury in Gemini conjunct Mars so it’s a double whammy.

On top of that, she’s got Venus in Gemini and she happens to be Italian so she’s got no problem getting right in his face to confront.

I see her as a quintessential Venus figure as she is pretty and (openly) demanding which I think is enormously attractive especially alongside the coy woman prototype. She’s also got planets in Cancer and watch her go for the security!

If you don’t know this song, the teenagers are barely dressed. He’s trying to get laid / lose his virginity.  There is a bit in the middle of the video where a baseball announcer comes on and he tries to get ’round the bases even though the two of them don’t like each other all that much.

If you’ve got the 8 minutes and you watch this, I doubt you forget it.  You will probably be entertained, probably learn something about men and women and at the very least you can see what people look like when they are (seemingly) tweaked on cocaine. ::smiles::

Chemistry? Well, they’ve got it.