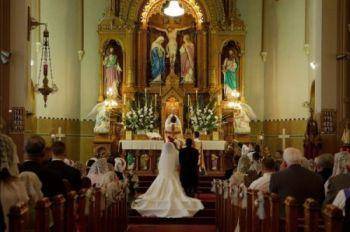 So we collide at the truck stop and within a couple hours we’re on tour of the city, guided by a friend of the soldier’s who happens to be a history buff.

So we stop at the water… learn about the barges, get a history lesson the next thing you know we are driving by this gorgeous cathedral in St. Paul. I noticed it but had no idea we were stopping… however we were stopping.

The soldier and I didn’t even glance at each other. How could this guy know we had this knockdown drag out fight about this just a few days prior?

So we’re walking towards the place, four of us, the soldier’s friend’s wife was along, me in a state of disbelief. At the entrance we ran into to three people standing on the steps outside. “There’s a wedding going on, man. You can go in but you should be quiet.”

Whew! I thought. A reprieve! We can’t go in. Alllllll right! I am sure I was grinning but it was premature.

Er… and so we did. We stood in the back and watched the couple marry. Timing was perfect, we saw the last 5-10 minutes of the ceremony during which I literally almost fainted not once but twice. And I’m not the type.

Later, the soldier brought this up.

“What’d you think of us seeing that wedding?” he asked.

“Oh, I think life, the universe just does this to us. To you and I,” he added. “This happens to us all the time. I think God does it.”

“Puts us in these predicaments where there is nothing we can do. There was no way to get out of seeing that wedding. It’s like God… the universe says I am going to put you two here and I am going to put you here together. You’re going to see this and I don’t care what you think. You’ve not nothing to say in the matter.”

“What do you think it means?” I asked.

“No idea. I could not claim to understand something like that in a million years. Other than I imagine it’s not random.”

“No, not random. We were being shown…”

“I don’t know what is means but I’m sure it means something.”

At that point I gave up. There are no answers.

Does the universe mess with you like this? Do you understand it?