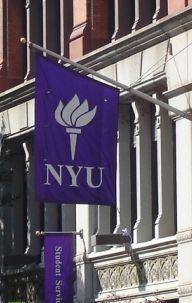 Besides travel and culture, Jupiter rules education and while in New York, HQ took me to the ITP Winter Show at NYU, where he taught a course last semester. The show is an opportunity for the students to showcase their projects… a solar bikini that charges your iPod and keeps your beer cold, and various other ideas and inventions. The place was packed.

And I think HQ thought I was bored, but I was not. In fact, I was completely fascinated. Because I am from the desert! And like I said, I crave exposure to other cultures, which is exactly what college life in a major city, is to me. I may as well have been walking around India! So I was smiling inside, unbeknownst to him.

So some of HQ’s students had projects in the show and he stopped to chat with them while I stood nearby doing what I do. Observing that is. Absorbing. For example, he was chatting with one guy and he asked me what I thought about the guy as we walked away.

“I liked him,” I said. “And he sure has the right glasses. Did you see those glasses? They were strange and they worked. Hardly anyone can get glasses that good for their face so I am happy for him. He has an interesting way of presenting himself. His clothing…”

He just looked at me.

And a couple days later we were emailing around another gal he spoke to while I stood by. At the show, I told him I thought she was incredibly coy. To the point of caricature! But anyway, he was somewhat disappointed with the show and somewhat concerned I felt the same. He would not want to be wasting my time in New York with boring things! But I tried to explain I was not him. I was not necessarily reading things the way he was.

“Take the girl,” I said. “You’re thinking… I have no idea what. Something technology thing I guess. Or business. But I am standing next to you thinking, this girl has dance training. Look what she’s doing with her foot. Look at her posture, her carriage. So I am watching her and thinking about her parents taking her to ballet class when she is a little girl. And now she’s at NYU! She’s growing up and this is how she is turning out. And I am thinking about how incredibly coy she is and wondering what it would be like to date someone like that. How different she is from me…”

So there you go. It’s possible to have a perspective that is incredibly diverse from even your closest friends. And this is my preference. I want as many angles on a thing as possible. It’s why I love astrology, I suppose. It’s not flat!

Are most of your friends like-minded or no?