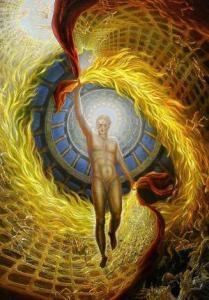 If astrologers are divided about Neptune, then they’re REALLY divided about Uranus. Uranus is about sudden change. Uranus is unfettered progress. It seeks to overthrow the existing order at all costs. And that, as we know, can be a pretty iffy situation. So which is it? Is Uranus benefic or malefic?

As always, myth is here to help. However, despite the name, our Uranus has almost nothing to do with Ouranos, the primordial sky god. Instead, the Uranus we know (and love?) is much more closely associated with Prometheus.

Prometheus took the assignment with joy. When Jupiter, king of the gods, had tasked him with creating humanity, Prometheus could hardly contain his excitement. Sure, Jupiter had asked for this mainly because he wanted to create lesser beings to worship and sacrifice to him. He basically wanted little adoration machines. But Prometheus had better plans.

So Prometheus set out to mold humanity from clay. He gave them pious hearts just as Jupiter had commanded. But he also gave them minds – minds that could be critical of the gods and of the established order. He gave them families and vocations and love and all the things that make life worth living. He wanted his little creations to thrive.

Jupiter, for his part, was irritated with the little extras Prometheus had thrown in, but decided that as long as humanity continued to sacrifice all their livestock to him, he would tolerate them.

But this bothered Prometheus. Looking down upon his little people, he noticed they were thin. Gaunt, even. They were starving, but it was nothing a little meat couldn’t fix. So Prometheus hatched a plan.

He gathered up the parts of a bull and divided them onto two plates. On one, he placed an old, spotted liver stuffed full of prime beef. On the other, he placed a bone, which he wrapped up in rich, delicious fat. And then he sped off to Olympus, a grin on his face.

“Great Jupiter, King of Olympus on high, please heed my words. Humanity is starving. The sacrifices we receive are too much for them to give. In order to preserve the human race, and therefore our continued worship, it is only fair that we share each animal with them.”

Jupiter, frustrated but amenable, agreed. The last thing he wanted was to lose all his wonderful sacrifices. Even so, he looked at Prometheus with skepticism.

“I will agree to your request, but why have you brought these two plates? One is most certainly better than the other.”

“Yes,” Prometheus replied, “they are clearly not equal. But far be it from me to deprive the Great God of his choice. I make no assumptions, but instead present these options to you for Your Holiness to choose.”

And Jupiter, gazing upon the offerings, pointed to the one dripping with lush, tempting fat.

Prometheus smiled wide and said, “So it is. Humans will sacrifice bone, entrails, and gristle to the gods. They shall keep the prime meat! How generous of you, my king.”

Jupiter, realizing the trick, flew into a blind rage. Not only had Prometheus failed to respect his office, he took away the best sacrifices, which were the whole reason Jupiter wanted humanity created in the first place, AND Prometheus successfully subverted Jupiter’s omniscience. This. Could. Not. Stand.

Jupiter raised himself and bellowed, “Your love for humanity has blinded you, titan! But now humanity will be as blind as you are. I hereby confiscate fire from earth. May you all stumble in darkness.”

Back down on earth, Prometheus saw the chaos. Humanity couldn’t cook, couldn’t light the night, couldn’t keep predators at bay. If something wasn’t done, the entire species would perish.

Cloaking himself in darkness, he stole up to Olympus while the gods were sleeping. He took a stalk of fennel and slowly lifted it to one of the blazing sconces lighting Jupiter’s palace. As soon as it was alight, he fled to earth and shared his bounty with humanity. Once again, they were saved.

But his joy didn’t last long. As he’d already known would happen, Jupiter discovered his theft. This time his rage could not be contained. Drawing up every ounce of his power as King of Heaven, he flung Prometheus onto a jagged rock jutting out over the ocean and bound him there. He then called one of his eagles and commanded it to devour Prometheus’s liver as a reminder of the organ in which he had hidden Jupiter’s rightful sacrifice. Prometheus took a deep breath and nodded. Off in the distance, he saw humanity dancing in firelight. He had done the right thing.

So is Uranus benefic or malefic? It depends on who you’re talking to. Uranus is an equalizer, willing to put himself on the king’s bad side in order to help the little guy. Because, as anyone who has had a disappointing or even painful Jupiter transit knows, Jupiter gives his gifts selectively. But Uranus loves every person with equal ardor. If there is a structure in our lives that doesn’t serve us, no matter how shiny it looks on the outside, Uranus shakes it away to make room for something better. And where there is power being misused, Uranus is there to knock it down.

Radical change isn’t easy. I’m sure humanity had quite the case of emotional whiplash as Prometheus attempted to secure their fate. And certainly Jupiter was none too pleased. But in the end, humanity thrived because Prometheus was willing to turn the world upside down to make it happen. And that seems pretty benefic to me.

Have you ever been helped by Uranus? Has your world been totally shaken? Tell us the story!