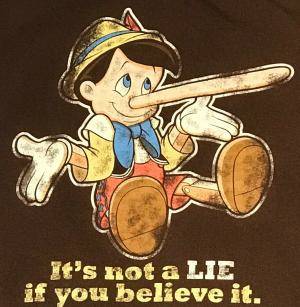 I saw a headline claiming that 1 in 4 people, lie about their finances when dating.  This comes as no surprise.  People don’t want to be alone. It’s very tempting to conceal things that are unfavorable.

I’ve done this myself and copped to it, back when I was writing about “landsharks” in the zodiac. I was a Venus-Neptune type landshark.  Living in health-conscious, Colorado, I smoked like a chimney. I quickly realized you had to be a non-smoker to date in that area so I became one (on screen).

Further, I deluded myself into thinking if I hit it off  with the man, or if he loved me, this would make the mirage, real.

Of course people lie about their age and these days we have the whole catfish thing, but this isn’t really about the lies we tell in our quest to be loved. It’s about lying in general.

About 18 months ago, I shared some highly personal & specific information with this older woman.  I thought she was a friend and she may have been one at one time. But something happened and the worm turned.

That means, there was a sea-change between us. It was pretty clear someone had her ear and whatever they were saying was not positive.  This happens to me so frequently, I’ve learned to just let go. I just don’t have time to run down people’s myths about me.  I’m am aware today, a person can either see my quality or they can’t.  With so much evidence of character, produced consistently, over time, if you can’t see me, I think your blindness is a handicap and not one that I can fix.

Back to this woman, I’ve not seen her in awhile. I think of her pretty often but when I felt her feelings change, I recognized the pattern and backed off.  But then I saw her in person so I approached her. I could tell she was a bit uneasy. I figured this was because she’d been talking about me in behind my back, but I didn’t care.  I really like this woman and I think people can wake from their slumber.

I greeted her and told her how much I missed seeing and talking to her. She fidgeted a little; there was some “fake-happy” involved but then she made this stunning remark!

In one short sentence she revealed that she and “the group” I guess you could call them, had concluded that I was a liar.  Not only that, but a liar who it is okay to mock!

First, I’d have to be a stone-cold psychopath to tell this kind of lie and maybe that’s what they think I am.

I wonder if lying has become so commonplace, that no one has the expectation that a person be honest.

People used to quote, Shakespeare, “The truth will out.” I grew up believing this but I no longer do. I think in most cases, the truth will never out.

If this is the case, and you are a person who can see clearly, you should probably be quite grateful.  Once a person is lost in the fog, it’s really hard to walk them out of it.

I also notice that once a person takes a position, they try to hold on to it, even when they’re deluged with evidence that should cause them to reconsider. That part of this is pathetic to me. It’s like being five years old and refusing to become six or seven, ever mind, twelve or thirteen.

What do you know about the lies people tell – yours or theirs?