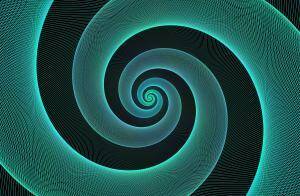 We’ve got five more days until Mercury turns direct. I knew this was going to be something – it’s exceeded my expectations on every level.

Mercury in Scorpio has been opposing Uranus in Taurus, upsetting people all over the world as information comes up from the deep. The planet will turn retrograde in on October 13th.  Rather than clearing out, the retrograde motion will keep this aspect live for another ten days or so.

I’m not sure when you might land here to read this so to be clear, Mercury will oppose Uranus throughout all of October, 2020.

Most who read that will be attracted and simultaneously repelled. Get sucked into a vortex did you? Oops! Mercury-ruled, Gemini and Virgo can expect their sleep to be disrupted.

You’re probably obsessing over something and you’re likely to continue to go back over it during the retrograde period. Mercury will re-enter back in Libra in time for Halloween. This won’t help much though. The planet will back up far enough to engage the stellium in Capricorn which includes Pluto.

Once direct, Mercury will ingress back into Scorpio on November 11th to oppose Uranus in Taurus some more.  This intense stress will ease towards the end of the month as Mercury into the later degrees of the sign, breaking it’s bond(age)with Uranus in Taurus.

Mercury will hit Sagittarius the first week of December. At that point, the mentally stressed should be able to catch a breath!

This will be hell for a lot of people. Some will like it but most will be drawn in, sort against their will.  That’s Scorpio, folks. What can I say?

How do you feel about being unable to look away from whatever train wreck has you captivated?