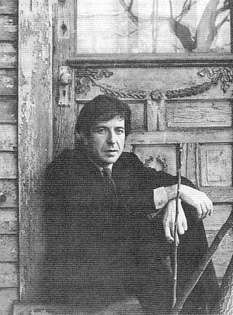 “So as far as I am concerned the gal in Leonard Cohen’s poem… well, he wrote her down, exactly which I think is nervy. Think about it. They run into each other – these ex-lovers. And she tells him his eyes are dead. What happened to you, Lover?” I smirked. “Like he’s broken or something. What the hell kind of thing is that to say? Who would to say something like that? It’s awful. It’s awful and it’s arrogant. Isn’t that how it sounds to you? Doesn’t that sound arrogant? You know? Uppity? Pretentious? Oh, your eyes are dead.”

“Well, I think so. So he goes home and writes a poem about her. He immortalized her in this poem and all it is the truth! It’s not hateful. It’s not vindictive. He says she lost her beauty and in fact she has. Because anyone who could and would say something like that, obviously has no beauty to them. How can make a comment like that and be beautiful, inside or out?”

“So I think he just wrote down reality. Apparently she was once beautiful. But not anymore if she is going to walk and make this kind of comment to people. And I don’t think he was mean. He just wrote the facts of this situation… in an elegant way I admire. And you did the same with that woman. Fact is, she slept with a cad. Your husband was a cad. He slept with her and then came home and talked nasty about her. What a jerk! So you wrote it down and in the process she took a fall.”

“And he took the fall too. Because anyone reading what you wrote knows what he did. He slept with this woman like some kind of experiment and then critiqued her, for Godsakes. How repulsive is that?”

“Agreed. I bet that woman Cohen wrote about wished she’s had kept her arrogant mouth shut. And your gal? Well if she could go back in time and keep her pants on, I’m sure she would. Or pick another target, right? One who won’t or can’t shoot back. Because she lost her life on that one. Her illusion of who she was and how people saw her.”

“And those robbers on the bus? And the rapist with the popped testicle? They’d make new decisions too. These people are out making life treacherous for others as if it can’t come back on them!”

“Well it can and sometimes it does. And fast.”

“Yep. But anyway, this stuff is fascinating to me. I have a lifelong interest in this for so many reasons I don’t think I can count that high. Violence and non-violence, I mean. I have had to think about this my whole life and non-violence is luxury as far as I’m a concerned. It’s fine until some guy is on top you and you’re being raped. Or someone grabs your kid and starts running out of the department store. You’re non-violent and you can preach it till you’re blue. But them something like this happens and all the sudden you find yourself hoping like hell for a violent intervention. These are hard questions. It’s hard to ask them and it’s hard to answer them. I’ve been trying to answer them all my life, actually. Can you believe that? You get this old and you find out what your life is about and for me, this is a very big deal. I wish I knew a lot less about it, actually. However I am having the life I am having.”

Do you have a stance or a position on violence?

Skip to Defend Yourself Effectively At Your Own Risk