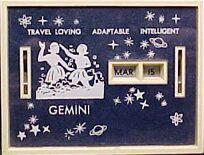 Joana (who lives in Portugal) writes: My Home Is Bigger Than Yours Home

Your soldier lived in Portugal? I’m amazed, yesterday it was the chivalry, now this…

The soldier speaks English, Spanish, Portuguese, and German, fluently. He speaks Italian (for the most part), some Russian I think. He had to learn Latin and he can get by in at least a half dozen other languages, maybe more.

In fact when we’re together, people always glance at both of us and then speak Spanish to me. It’s embarrassing but then he steps in and let’s fly. It’s a chivalrous act, like getting the door for me.

He also plays wicked games with his abilities but those are stories for another day. He does not think it is possible to be in love in Germany because the language is so bad on this front. He says if you say “I love you” in German it sounds like you just punched the person in the mouth.

He has Venus in Gemini in the 3rd house in wide opposition to Jupiter in Sagittarius in the 9th and can definitely chat you up. He lays the romantic Spanish on top the Southern gentleman thing and forget about it. You go down.

Lucky for me I am pretty much the only person on the planet he likes or I’d be in big trouble.

Are you bilingual? Trilingual? More? Got Gemini??