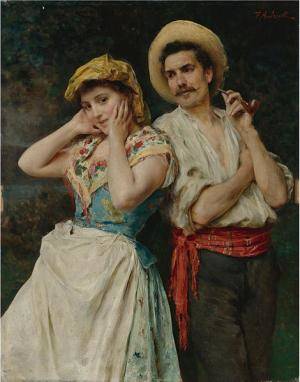 Very generally, a man with Venus in Gemini likes a woman who is witty, young-appearing and flirty. Most likely doesn’t want to have long discourses on heavy subjects, like his girl to move easily from one conversation to another. Having an open mind will go a long, long way. If you’re someone who only thinks in terms of black and white, he may find that BORING. And even if you’re 75, all that matters is that you’re young at heart!

Now let’s look at that Venus in Gemini through the houses: If his Venus falls in his……

First house: Chances are he rarely sits still, so just do this: Sit on his lap while talking to him. Whisper in his ear. Tell him allllll the ways you find him appealing and desirable. This is a man with lots of friends and without the attention span to wait around to see if you’ll become interesting so you’re going to have to hit him with the 2×4 right out of the gate. Don’t EVEN bother trying to be subtle.

Second house: Take him to every single Home Depot within a 10 miles radius and wear a very short skirt while going. Ask him double-entendre questions about tools. When he’s working on home projects, talk to him about your other ideas. You’ll be surprised how hard he’s listening, and how often your desires manifest!

Third house: He will literally never get sick of hearing your opinions on things. However, this does not mean you can be heavy-handed with judgments. Always keep it light. His neighborhood likely means a lot to him, get involved in the things he does locally.

Fourth house: He wants a woman who knows how to make a home, and does it stylishly and is up to date on the current trends. Get a bunch of House Beautiful magazines and spread them around your house the first time he comes to visit. I’m thinking he’ll want to help you make some choices. It could be a *lot* of fun decorating a home with him! He may also really appreciate you taking something “classic” and updating it so it’s trendy.

Fifth house: Oh my. While you’re sitting on his lap, tell him your sexual fantasies. Insist that he only gets to kiss you while sharing. When you’re done torturing him, take him to the casino. Wear a short skirt. Drop your money on the floor a lot, bend over to pick it up. If you constantly tell him that he’s the bomb, he is going to assure you that you’re his lucky charm, not only at the casino but everywhere else.

Sixth house: This one dampens down the frenetic nimble-fingered Venus. He’s picky about his ladies; he’s picky about his pillow talk and may have to really, really get to know you before telling you his fantasies. A good way to gauge him is to sidle up behind him when he’s doing the dishes. If he’s all work and no play, you’ve got your work cut out for you, but if he gives you the pelvic nudge, it means you should let your fingers do the walking while he’s doing the drudge work!

7th house: Hmmmm. Watch him from afar for awhile. Does he need to flirt with EVERYONE? Do his friends say he has a different girlfriend every week? If he’s not a player, then jump in there and let him know that you’re not a player either, but you just LOVE people, and want to hear every little thing they have to say. There’s likely to be a whole lot of group gatherings. Tons of fun. Pool parties, poker games, trips to Tahiti.

8th house: He’s in it for keeps, flirting is serious work, and if you have sex with him, expect him to have skills beyond your wildest imagination. He’s been reading books, you know. Even if you’re not into threesomes, tell him that you have always liked the fantasy. If you’re really, really, really not into threesomes, make it very clear that if he tries to invite a third party in, it’s the end of the smack-talk, he’ll never get another group sex word out of you.

9th house: I think this guy can handle his woman being a know-it-all. Unless he has a heavy fire signature in his chart, he may be very willing to let you take the lead AND have the last word, just because he thinks you’re so dang SMART. If you’ve travelled, talk to him about the places you’ve been. He wants to hear about it. Oh… speak in a foreign language. Schwing!

10th house. You need to look good, because he needs to look good. His woman is definitely an extension of himself, so what you do reflects on him— he wants to brag about you! Definitely keep the PDA on the down-low. You’ll have to whisper something to him that you are absolutely sure *no one* can overhear in order to gauge just how tight his lips are zipped when it comes to flirting with him in public. However, in private, the earthiness of that 10th house will show you just how much he appreciates your efforts.

11th house: I gotta tell you, this one is more into friendships than deep romance. However, this kind of relationship stands the test of time, if you can get past the initial slooooow process. He wants a woman who is clever beyond measure. Your words need to border on brilliance. The way to his body is through his BRAIN.

12th house: Gemini influence in the 12th has a deep interest in the psychological tickings of just about everything. He wants a woman who muses out loud about esoteric things and isn’t afraid to discuss the underprivileged and atrocities such as animal abuse. Gemini Air helps keep you from drowning in despair over these things; makes it so you can brainstorm together!

Ok, now that I’ve said all that, I want to point out that his MARS matters a lot. Venus shows his values, what he wants in a partner. Mars is how HE ASSERTS HIS MASCULINITY. And if you’re a woman, your MARS shows what you want in a man. Venus is how you act out your partnership desires. This is why Venus/Mars synastry is important when comparing charts.