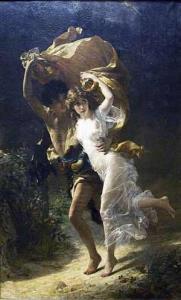 There have been two threads in the forum over this last week that deal with conformity on some level. I was the odd man out on both of them.  I’ve thought about this a good deal over the last couple days because a couple people made similar points… go along to get along, basically. The idea is that it’s easier for people to be cohesive as a community, if they agree.

Initially, I noted my parents are hardcore Aquarians.  This is true and they certainly made their own rules. MY grandfather, Henry, was always insanely independent. He slept in his front yard on a slanted piece of plywood, nine months a year and that’s not even a drop in his bucket.  Still, there is more too this.  There has always been more to it and recently, I’ve begun to figure it out.

Reading the thread, my first thought was that I was socialized to be the way I am. I wondered if the people who see valuing in agreeing even when you don’t might have been socialized to see things this way. Basically, I have one chip. They have another? Probably. In my mind, you would have to be taught to agree when you don’t agree – it doesn’t seem natural to me.  It’s like being taught to write cursive… or not. If you weren’t taught to write cursive, chances are you print!

Then today, I remembered this post or rather I remembered this conversation I had with double Gemini astrologer, Claire France). She told me that most people preferred to live in a “world of agreement”.  That was her phrase. She added, “that isn’t important to you at all.”

I was interested in what she was saying but it was news (and new) to me so I asked her about it. I verified what she was saying, particularly about the people who are not me, because I am me and I knew she was right on that front.

Thinking of her, I pulled up this post from 2014, where I mentioned her but I think this conversation is from the late nineties if you can believe that.  I guess this means, this really is the way I am.

Here is the original post. I just wonder what people think of this.

~~~~
Years ago, a friend told me that most people wanted to live in a “world of agreement”. I wrote about this at the time. She thought it was remarkable that I could get along with people I did not agree with.

I had no idea that people wanted people to agree with them all the time. It seems strange even today.

This morning, my husband informed me that he agrees with me about thirteen percent of what I do.  Can you believe that?  It seems low to me.

“Thirteen percent? Is that all? I was surprised. I also can’t believe that people who think in terms like that – thirteen percent agreement.”

“Well, I think like that! It’s thirteen percent! I don’t care about this notion that says we all have to agree all the time.”

If someone told you that they agreed with thirteen percent of what you say or do, how would you take this?  Would it change how you interacted with them?

~~
Here are the posts from the forum:
The Asch Experiment
Ethics & Astrology