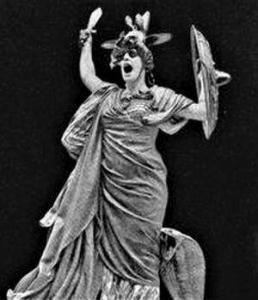 We all know that Saturn rules fear. It’s the Greater Malefic, and in the ancient world, he symbolized lack, endings, and the cold touch of death. That’s pretty spooky! So when we’re dealing with paralyzing fear and icy dread, it’s reasonable to guess that Saturn is involved. But in the ancient world, we might find some disagreement. And the answer, as usual, lies in myth.

In ancient Greece, when astrology was being developed, Mars was Ares. And Ares lacked all the positive qualities we usually associate with Mars. Tenacity, strength, and victory would be later additions to his character, not coming into play until he was exported to Rome. No, in Greece, Ares meant war.

And not the positive connotations of war. Not strategy and cunning, which were reserved for Athena, not loyalty to fellow soldiers, which was left to whatever deity ruled the city, and not even victory or honor, which was Nike’s realm. Ares, the most hated of the gods, delighted in chaos.

Ares showed himself in the shrieks of pain as sword met skin, the panic and terror of a teenage soldier breaking ranks and fleeing, the frenzy of a berserker mowing through the crowd, and the shattered cry of loved ones realizing their men weren’t coming home. Even in the hymns of those who worshipped him, he’s portrayed as monstrous. “Mortal destroying king, defiled with gore, pleased with war’s dreadful and tumultuous roar.” He’s even described as he “whose works, with woe, embitter human life.” This is not a nice guy.

And he didn’t show up to battles alone. He had an entire retinue. They included his sister Enyo, who created the call to war and delighted in all manner of strife and conflict, his son Deimos, who ruled blind panic, and finally, his son Phobos, whose name in Greek simply meant “fear”.

That’s right! In classical mythology, fear was the literal offspring of Ares. And with this background, it’s easy to see why. War was a constant threat in the ancient Mediterranean. Cities and villages could be sacked at any time, and the horrors of war scarred nearly every man, with most having been called to fight at one point or another. Even in the Odyssey, there’s a mention of what we would today likely call PTSD, as Odysseus struggles with depression, paranoia, and flashbacks when he returns home. He would often be found staring out to sea, a blank look on his face. He had seen Ares’ work first-hand, and it changed him.

But there’s a benefit even to this level of Martial fury. You see, Ares brings fear with him. When you’re fighting against him, fear works against you. When you don’t move, don’t act, don’t choose, don’t fight – that’s when fear becomes your enemy. But when you decide to consciously channel your Mars? That’s when the magic happens.

When you channel your Mars, you bring the fear with you. People want to block your way? Not when Ares and Phobos are standing at your shoulder. Life wants to hold you down? Not with this fighting spirit. Someone passive-aggressively pushing your buttons? Let Enyo drag that conflict to the surface so you can have it out. Not sure which action to take? Make a move in any direction, and Phobos will be at your back instead of staring you in the face.

Ares is, as I mentioned, not a nice guy. But life doesn’t always call for niceties, does it? Sometimes life requires a bold, powerful, no-hold-barred approach to our problems. And while few of us like to live in that space all the time, all of us can benefit from harnessing that fury every now and then. So when you’re mired in fear, don’t shrink. Stand up, take action, and let fear work for you.

Have you ever channeled Mars to overcome fear? What was the result?