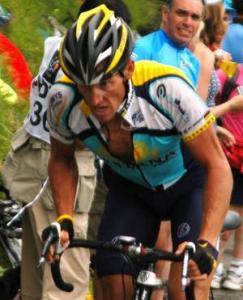 Several people mentioned wondering how he seemed to feel no remorse. The word “psychopath” is thrown around during the program.

I suppose that’s possible, but facts is, people find ways to justify what they do. And judging by Armstrong’s chart, he was have a particularly easy time of it.

For starters, he’s got a stellium in Virgo that includes for the Sun and Moon. This man is going to see himself as a do-gooder.  He’d feel he’s a do-gooder. A do-gooder (Virgo) on steroids (Pluto).  Because of the cancer thing, see?   He can tell himself, if his empire crashes, cancer patients will suffer.

Secondly, he’s got Mars in Aquarius trining Libra. He cheated but I bet he figured, so did everyone else!  He cheated the best, so what? It’s likely he considered what was doing to be “fair”. Because he threw a lot of money around too. He got the glory, X, Y or Z got $100,000; what’s not fair about that?

Last, he has Jupiter conjunct Neptune in Sagittarius opposing Saturn. Saturn eventually caught up to him, but in the meantime, it seems no stretch to me that he might feel he is serving the sport of cycling.  The illusion (Jupiter Neptune) he created was good for business, and not just for his business.

So when it all comes down… well I could see him considering himself a victim in the whole thing.  All he was trying to do was help create jobs and help cancer kids.