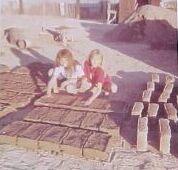 A gal asked me to refresh this post in regards to suffering due a “mistake of the intellect”. Here you go…

My husband and I met when we were teenagers.  We talk ten times a day. It’s fair to say we know each other very well.  But people are so complex.

Projection, imagination and your own preconceived notions about another person are very powerful.  I’m consistently surprised by things my husband thinks apply to me and I’ll give you an example.

We’re moving to a rural area. He seems to think he’s an expert on this and I am a city girl?  How bizarre. Like he doesn’t think I know anything about not having people pick the trash up.

I listen to this, as I recall growing up the desert, burning trash in a dozen fifty-gallon drums, until there was no choice but to heave their stinky, ashy, gunky contents into the back of a truck and head to the dump. Does that sound like a city girl to you?

I grew up in a mud house and we had to build that thing. With our bare hands! Like in the picture.  Those aren’t city girls! 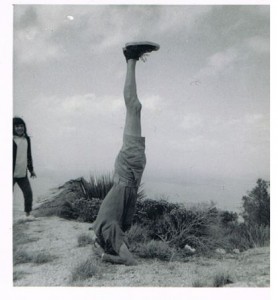 So here’s what I see…

The relationship between my husband and I continues to deepen over time. When he’s told he’s got his Elsa-story wrong, and provided proof, he has to re-think things. In this process, we become closer. It’s educational!

Now compare this to a person who has to be right, who thinks they are always right. When you cross or challenge their ideas about you, they basically go ape-shit.  They may be disillusioned when you fail to match the picture in the head. Often times they’re mad as hell.

In whatever case, they just don’t have the ability to re-shuffle the deck of cards in the head, and really get to know another person who is *not them*. This dooms a person’s relationships and makes them a bit crazy, I would think.

I have no idea why my husband routinely blocks my background from his reality. I guess we were separated all those years. A person fills in the blanks of a story in their own way. It’s hard to undo “mistakes of the intellect” of this type, but richly rewarding.

What qualities really belong to the person you tag them with? It seems you could spend 100 years separating yourself from “the other”…and you’ll need an open mind.

The second picture is of my grandfather standing on top his head, on top a mountain with his head in the dirt.  We’re city people all right – NOT.

Henry (pictured), an authentically interesting person, was a Double Capricorn with a large stellium in Sagittarius. Get the real (Saturn) story (Jupiter), not your narrow-minded perception, based on your limited view of life!