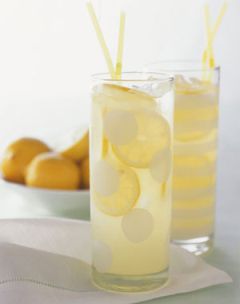 The soldier and I were talking about lemonade which I do not like. He is distraught over this (his word) because he loves lemonade and he’s gone as far as to say if we’d have met a kids (little kids… 8 years old or something) he might not have liked me.

“I think I’d have wanted to have me a lemonade-drinkin’ woman,” he said. “You know. I want to drink some lemonade with my girl.” We were getting into the bathtub at the time.

“Henry (my grandfather) wanted a glass of lemonade once,” I said. “He was dying.”

“Yeah. I had him in my car and I was driving him around and he was dying. I had taken him out of the hospital, see? And we were driving around doing some things and he said he wanted a glass of lemonade. He was having a craving, I guess. We was actually licking his lips and asking for some lemonade… wishing for it. I got him some, thank God. Boy am I glad I did that because then he died.”

He looked at me.

“Yeah, I got him the lemonade which was not the easiest thing to do.”

“Where the hell do you find lemonade?”

“Lemonade is not hard to find.”

“The hell it isn’t. It’s not like we could be running in and out of places asking if they had lemonade. He was dying in my car.  You just can’t drag him into a bunch of restaurants. But he sure wanted a glass of lemonade and I did get him one and he drank it. He was damned happy too and 10 hours later he was dead so you see what I mean. Thank God I got him that lemonade because I really didn’t know he was going to die that soon. Basically that lemonade was the last thing he wanted as far as I know.”

“No, I have never liked lemonade but Henry liked it and I sure am glad I paid attention that day. I was 21 and supposed to get him back to the hospital.  I have no idea how I’d feel if I’d have not done done that… found him some lemonade. But I did find him a glass and boy was he happy. In fact, he said it was the best lemonade he ever had in his life, I said, smiling lopsidedly.