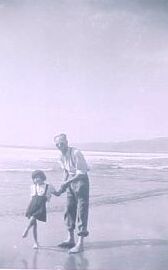 These excerpts are all from letters to my mother. My mother is a double Aquarius and you can see the Aquarian themes here. He is making sure she knows he is no impinging on her freedom…and “friendship” is an Aquarian concept.

Henry was born in 1900, so it is easy to track how old he was when he wrote these letters. He is 55 when he can walk on his hands, for example.

“…I thought you might want to visit your mother while they came over. I am not telling you what to do, just asking for information; you just do what you want to do.”

Letter to my mother September 21 1955 (She is sixteen, married and pregnant)

“…You say that you and Tiger are lonesome. Then why did you dispense with all your girlfriends (against my advice) when you got married? Friendships should be valued above most other things as they will go right on in the next life. Most things you can’t take with you, but friendships will endure through the ages…” 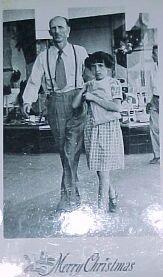 “…I talked to (her cousin)’s new boyfriend. He is Italian and nice looking. He is psychic and gets information from spirits all the time. He said that some of his ancestors were gypsies and all gypsies believe in spirits…”

“…It may be years before you can understand this but you will. As I have told you many times before, the foundation for the beginning of spiritual development is to have a mind absolutely free from hatred, prejudice and ill will of any kind. In this life, the only important thing is spiritual development (all other things are only temporary).

~~
pictured – Henry with my mother on the beach in Mexico and on the street in the desert city where they lived. Henry was a single parent, raising my mother by himself, from the terrible twos on…