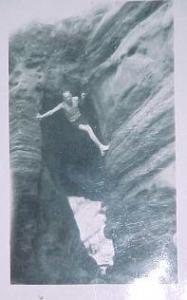 Here’s a quote I missed, related to metaphysics:

“…My brother woke up at two in the morning and said his heart was not working right. His son is going to be a doctor so he came down and listened to it with his stethoscope and it sounded all right. Then perspiration came out on his chest and they called a doctor but he was dead before the man got there. He had Berger’s disease in his foot and has had diabetes for many years but we never guessed there was anything wrong with his heart. I feel his long years of smoking may have had something to do with it.

It was with him in mind that I ordered the reprints from RG. But he will not need one now and I am circulating them here among friends. I am determined to communicate with him next summer if I have to visit every medium out there.”

~~
And for the record, these quotes come from a collection I’ve transcribed from Henry’s letters, of which there are many hundreds. I have them dating from about 1915 but he really started saving all correspondence in the late 40’s, making a carbon copy of everything whether he typed or written longhand.

I vividly recall him postponing answering a letter because he was out of carbon paper, forcing a trip to “town”. Because we lived in the desert, everyone knows that, right?

And at first he stored the letters in boxes but eventually bought a large filing cabinet and kept the letters organized. He was a professor of library science, remember? And he made it very clear that letters were private. He taught us that although he saved everything he composed, it would be highly inappropriate to save a letter someone else wrote.

“…I am still getting along without meat and feel just as strong as ever. I think it is wrong to kill and eat animals. I think it is murder to kill any form of life and when we eat what we kill it is actually cannibalism. Over 3 million people in this country eat no meat and among them are some of the strongest people we have. Horses are strong, bulls are strong and none of them ever eat any meat. Meat is an excellent protein food, but there are other protein foods that don’t have the disadvantages of meat…”

“….. Like Albert Sweitzer I have a reverence for life and will not even kill a snake. Did you know that there is a statement that snakes will not bite vegetarians? It is said they know by instinct which person is a meat eater. I have read much concerning the ancient Kahunas of Hawaii and I am inclined to agree with them, that there is only one sin, TO HURT SOMEONE. My only fear in life is that I may hurt someone. I will go to any sacrifice to avoid an altercation.”

skip to part eight…
Don’t know who Henry is? Catch up here Part one