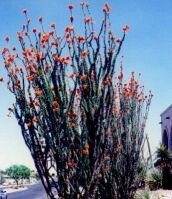 That’s a picture or an ocotillo cactus in bloom. As you can see they’re very beautiful. They also make excellent fences. Ocotillo cactus is very easy to grow (in indigenous areas). If you snip a branch off and stick it in the desert dirt, it’s very likely take root and grow. To make living fence, you only need dig a shallow trench and then hunt up the cactus…respectfully.

By that I mean you don’t find a cactus and cut all its branches, leaving it to die. You do not kill the natural resource that provides you will FREE fencing material! You cut a few leaving the plant to recover stronger and thrive. Anyway, you stick the ends in the ground, one right next to the other and wire them together. Ocotillo is not terrible thorny so this is challenging, but not incredibly so. 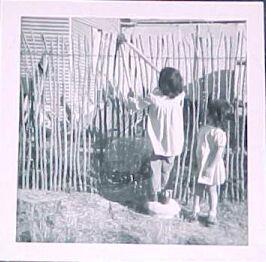 Once you have your fence up, you have to water it to encourage it to root…but not much because we’re talking about cactus here which doesn’t like a lot of water. Then the next thing you know, you have a fence that blooms. They’re really are beautiful and they change with seasons. They go from brown (dormant) in the winter, to being covered in green leaves for spring, and then eventually the red flowers bloom on top mid-summer.

That’s a picture of my sister pruning a fence and me wanting to prune a fence. Like trees, you should prune while the cactus is dormant. This should be done once each season, if you want an orderly looking fence because the branches grow at variable rates and can easily grown six, or eight or ten inches in the few months they are active.

You can also leave it as is for a more natural, wild look. Personally, I prefer a maintained fence, but really, either way has appeal. The branches will eventually sprout arms (new branches) which begin to look like hell after awhile, if completely neglected.