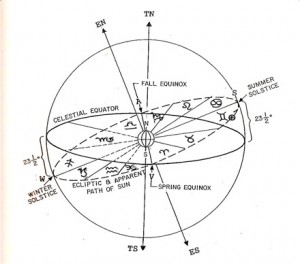 There has been a lot of hubbub lately over some claims about shifts in the earth’s rotational axis and its relation to the signs.  Everyone is wondering “Am I a different sign?”

Well… Yes and No.

Let’s see if we can shed some light on this subject before y’all run out and get your Gemini tattoos lasered off. We’ll start with some definitions.

The Zodiac refers to the band of constellations that lie along the ecliptic.

The Ecliptic is the path of the Sun.  Now, this is tricky because we all know from grade school that we’re the ones moving, not the Sun.  But from our vantage point, it does appear as though the Sun moves, yes?  So, we have this idea of a band through which the sun travels.  If the Sun left a trail of bread crumbs in the sky, this trail would be the ecliptic.  Keep in mind that the ecliptic is an abstract mathematical idea that we project onto the heavens.  It is not something that you can go out and touch.

So, a long long long long time ago, before tv, before ipods, before facebook people who needed something to do looked at the sky.  Some people still do this.  The sky is fascinating.  As is human nature, when confronted with the limitless complexity of the beyond, people began to parse that beyond in an attempt to understand it.  We clumped stars into arbitrary groupings, called them constellations and gave them names. We watched “those that wander” (the planetary bodies) and obsessively charted their travels.  (OCD is not a new phenomenon.)

In this mania to know what was out there,  more abstract mathematical concepts were needed.  One of those concepts that proved very useful was the idea that the ecliptic could be divided into 12 sections.  Each of those sections could be further divided into 30 degrees.  This idea made calculations and predicting movements much easier.  But what to call each section… How about we name each one after the constellation closest to it?  Ah, the Zodiac!

So, here’s another tricky part.  The actual Zodiac, as in the actual constellations are not equally distributed across the sky.  They are an organic smattering of God’s grace, if you will.  That’s ok.  We never intended to use them as exact boundaries, just eponyms for our abstract wheel of 12 that we have superimposed across the sky.  See, each “sign” does not represent the piece of celestial real estate where the constellation resides.  It represents a chunk of sky named after a constellation.  I mean how many Martin Luther King Boulevards have you seen in your life? You know he doesn’t live there, right?

Stay tuned for tomorrow when we explore what happens to the zodiac as we start to percieve a shift in the Earth’s rotational axis.

And yes, we will eventually answer the question “Has your sign changed?” Just bare with me.