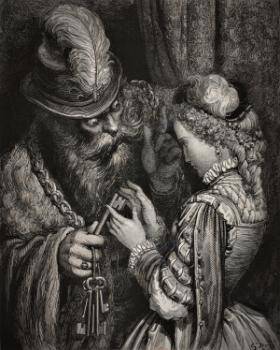 As if 2020 didn’t already have enough twists and turns, this year as the sun rises on October 31st, the full Moon in Taurus will loom overhead, casting a tinted sheen of horror over everyday life.

The Moon will be exactly conjunct Uranus and widely conjunct Black Moon Lilith as it opposes the Sun in Scorpio. Issues related to power, secrets, and hidden machinations will be suddenly brought to the surface. If you have planets around 8 degrees in fixed signs, be prepared for the shock of your life. This Moon is spooky, sexy, and unpredictable.

It’s wandering through the woods on a misty night and coming upon a coven of witches dancing wildly in the moonlight.

It’s coming home after a long day and finding a succubus lounging in your bed.

But more than anything, it’s Bluebeard.

If you’re not familiar with the story, here it is in a nutshell:

A young girl is married off to a wealthy widower, Bluebeard. Upon entering his castle, she is told she can enter every room except for one. He promptly departs on business, leaving the girl alone to explore the grounds. And, like any of us, she immediately goes to the forbidden room. As she opens the door, she finds a torture chamber filled with bodies of all of Bluebeard’s former wives. She drops the key to the door into the puddle of old, congealed blood, and the key is stained. When Bluebeard comes home, he asks for his keys, and sees the telltale bloodstain. He flies into a rage and tells his young bride that it is time for her to join the others. She asks for a moment to pray in her room and prepare herself to meet her maker. Like all villains, he is overconfident and allows her to go. She screams out the window for her sisters, who come riding in on horseback and drive a sword into Bluebeard’s heart. Thus the young bride is saved.

Bluebeard, representing the Sun in Scorpio, has his secrets revealed by a young woman, represented by Moon/Lilith in Taurus. And Uranus cuts both ways. While the young girl was certainly shaken to her core by her discovery, Bluebeard saw his reign of terror come to a sudden end at the hands of the same person he chose as his victim. So who got the bigger shock, hmm?

This full Moon is delicious. Like any spooky tale, there are twists and turns, goosebumps and monsters, and a chill that lingers in your spine. So settle in and watch the story unfold.

What are your plans for this Halloween Moon?