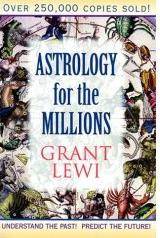 I ran across Carolyn Steven’s tribute to astrologer and author, Grant Lewi, who is famous for predicting his own death. Lewi’s astrology books are classics and he has the very odd distinction of being the most usurped astrological writer of all time.

By that, I mean that I have heard his ideas and arguments come out of the mouths of so many people it’s a joke. People repeat what they have read in his book, nearly verbatim at times acting as if these ideas are their own! And this has fascinated me for years. Do they think they are the only one who has read, “Astrology For The Millions”? Because this is the book most transgressed.

In “Astrology For The Millions”, Lewi writes about people who “believe in astrology”. And he says it makes no sense to believe in astrology and he goes on to write the most elegant essay you could possibly imagine. These paragraphs are so finely wrought, reading them, you are forever tattooed. His view on this is so distilled and real, it’s impossible to forget what you’ve read. And what happens is a good percentage of people who are exposed, adopt his philosophy on the spot. And next thing you know, they’re out in the world spilling his words from their mouths as if they came up with them organically.

And I don’t know Grant Lewi so I have no idea how he might feel about this. He might be flattered or he might be pissed. And he’s dead, so I can’t ask him. But consider his title. “Astrology For The Millions”.

What kind of title is that? It’s not “Astrology for You and I” is it? It’s astrology for the millions and this is the irony. Lewi is so often plagiarized, I am pretty sure he has reached his million people many times over. And perhaps when he titled his book he knew this would come to pass, just like he knew on which day he would die.

Carolyn Stevens is calling him the “Father of Modern Astrology”. Some astrologers may argue that, but I feel comfortable with it and this is why. So next time you hear someone arguing passionately about whether astrology is something a person can believe in, smile and think of Grant Lewi. A great astrologer, a great writer, a great man who wrote a great book, “Astrology For The Millions“.