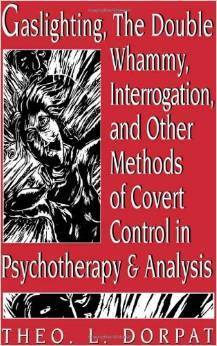 I almost never come across a book this good. It’s rated five stars in four reviews on Amazon, I think it’s pretty scarce but I was able to borrow if from Denver University Library. I was surprised when I got the copy because it was written in 1996 and appears to have never been read.

The title should have sold this thing, you’d think. “Gaslighting, the Double Whammy, Interrogation and Other Methods of Covert Control in Psychotherapy and Analysis”, by Theo. L. Dorpat. I will leave others to explain why that didn’t happen and just tell you this is an extraordinary book.

It deals specifically with the interplay between patient and practitioner during psychoanalysis but everything in it is widely applicable to all relationships and sports a gem or two or more on virtually every page.

This is not mass market material but psych-minded people will devour this book and here’s a sample. It is not especially indicative of the style of writing or content of the book, in fact this bit is opposite that but I was struck by it and wanted to share it.

On Normopaths and Functioning as a Mirror for Others

People who did not know Mrs. G well erroneously thought of her as being exceptionally “normal”. This erroneous judgment was based partly on her surface agreeability and appearance of being “normal”. Her sense of security was founded on her ability to understand and meet the expectations of others and this is what she initially believed meant being normal. She was a “normopath” – one of many in our culture who want to appear normal and who confuse the appearance of normality with the substance of normality. Though she was extraordinarily sensitive and vigilant to the desires of others, she was most often vague or unaware of her own desires and needs. She gave to others what she unconsciously wanted for herself, and frequently in her interactions with others, she provided selfobject mirroring functions for them.

In her interpersonal relations she behaved like a mirror reflecting back to others what they wanted and at the same time (again, like a mirror) concealing from the view of others whatever was going on inside of her and behind, as it were, the exterior surface of the mirror.”

I’ll tell you what I thought when I read it. I thought, jeez! I’m glad I’m repulsive!