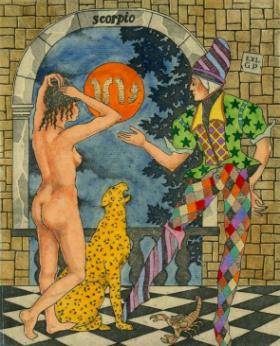 The full moon in Scorpio with take place on Saturday afternoon on Saturday, May 18th at 27 degrees.  At first glance, it looks taut and stressful with Mercury conjunct the sun in Taurus opposing the moon.

I admit, I have Libra. It looks off balance to me. It looks unfair.

I also wonder if Mercury in Taurus can speak to the deep-feeling Scorpio moon.  What would motivate these two characters to even bother?

As it turns out, they probably won’t have to bother or at least they won’t need to communicate directly. This is because there are several bodies that can intercede and/or transmit or translate information.

I’m talking about Saturn and Pluto in Capricorn and Neptune in Pisces. The planets are supporting the sun, Mercury and the full moon and chances are very good that everything works out.

To better understand, just think of a kid who wants something. He or she may go to mother, and ask her to talk to the father on their behalf. Or maybe it’s the father who has to soften up the mother.

Either way, you see what I mean. The deal gets done.

I expect most deals will get done under this full moon but I don’t expect it to be comfortable (for anyone).