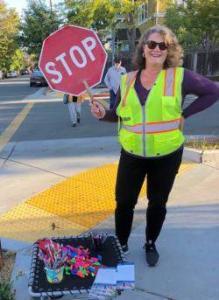 There’s a gal I know; I enjoy her tremendously. She’s so forthright, it’s hysterical to watch.  I have Mars conjunct Mercury in the 9th house.  I’m sort of a cheerleader for this sort of thing, even though I know it’s off-putting to some.

She came over the other day, to pick up something that was left here by mistake. I heard her coughing on the phone the day before. I was not at all surprised to see her exit her truck, wearing a mask, even though we’re out here in the middle of nowhere. I exchanged the good, careful to keep my distance. This is when she decided to tell me of her experience in the local Walmart. Out here in the country, this is how news spreads, right?

She reported, she could not believe the stupidity of people. “SIX FEET!” she said, with her hand extended out, palm outward to indicate, “STOP”. Like a crossing guard, see?

She went on to say how she had to do this over and over. Apparently she went through the entire store, ordering people, “SIX FEET!”  And, “DID YOU NOT HEAR? STAY BACK SIX FEET!” I was laughing of course. Apparently, at some point she had to extend two hands, one in front and one behind. Or maybe she had a ninety degree problem. Yes! I thought of the astrology!

A day later, I was talking to a client. She reported passing someone in the grocery store and being stared, daggers of death. She’s a Scorpio. She’d know!  But this is when it hit me.

What’s your social distance style and reaction? I think this is a great question for the full moon in Libra!