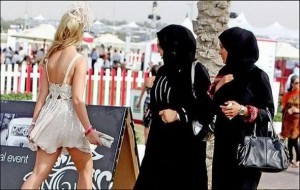 I want to outline a scenario and see what people think about it. It’s loosely based on a real case, but the case is not unique. There are a lot of young men and women in situations like this one. It’s a common problem for children of immigrants who have grown up in America.

I specifically want to know what people believe about love and finding “the one”, and also how they feel about this. So here’s the story.

Let’s say there is a young woman.  She’s 21. She was born in America, but her parents are from a culture where traditions are very important. Let’s say they are Indian.

So the girl goes to college and BAM. She falls in love.

The man who steals her heart is American. He’s as American as can be and he’s a Christian.

Now the girl knows she can’t take this boy home. Her family is simply not going to be okay with the situation.

If you’re an American and you don’t understand this, just take my word for it. I work with people like all the time. So what she does is she sneakily dates the man who he makes her heart sing.

Now in my culture, it’s believed there is a soul for every soul.  There is someone out there for each of us, whether you wind up with them or not.  So let’s just say this relationship is of that quality.  The girl is not rebelling or experimenting – she really loves this man and he loves her.

But you know what? It’s just impossible.  Her parents will never accept him, and ultimately she ends the relationship and decides to focus on finding a partner her parents will accept.

Now what does this mean, hmm? I am not someone who lacks respect for tradition.  I do believe there is a soul for every soul, but is a person really the soul for your soul, if it creates a lifetime of discord in your family?

I imagine this would have to be considered on a case by case basis, but you get my gist. I sure wouldn’t want to be faced with a question like this, especially at 22 years old!

There are exceptions,  but I think by and large, when a family does not back a married couple, it does a lot of harm. It makes it very hard on the couple.

On the other hand, being and staying married to someone, primarily because they are appropriate is also quite hard.

It’s not just race/religion. It’s very hard for someone ultra-rich to marry someone poor, or from the other side of the tracks. These situations are essentially the same as far as I can see. The family is not into the potential partner, simply because they are not what they want for their child. They did not to X, Y and Z, to have them wind up with C!

Being the way I am, I would go for the love myself, hands down. I would pay the price, but it’s easy for me to say that, since I have no family or status to lose!

It makes me think of various religions / cultures, such as the Amish or the Mormons, who kick you out of the community it you don’t maintain their standard. This is a serious situation. It’s painful.

I have been the person from the other side of the tracks. I married a man from a family with status and we had no peace whatsoever. Someone called him on a DAILY basis to tell him not to be with me. When he decided to marry me, they called him twice a day and when he did marry me, he was called non-stop until we divorced! I mean, if you think this doesn’t take a toll, you’re crazy.

In my culture, the marriage take precedence over the relationship you have with your family. The spousal relationship is primary.

In other cultures, the family / your blood comes first.  So while I think you should be with the person who takes your breath away, others would say, ‘Not at the expense of your family.”  And  who am I to say they’re wrong?