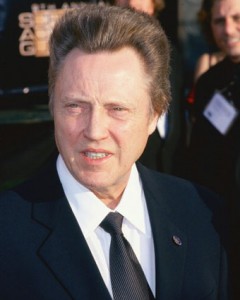 Walken is a prolific actor and a Sun sign Aries who is a thinking man with planets in Aquarius, Libra and Gemini. Walken is said to have caused many younger actors to want to imitate him because of his delivery of lines and his particular timing. Christopher has appeared in over 100 movies and television shows. He is a cult favorite with acceptance from the mainstream as well. Christopher is a thinking man’s actor which one can see from only one of his many, many performances.

Christopher has Moon and Mars in Aquarius opening his emotions for all to see with Saturn and Uranus in Gemini and Neptune in Libra supporting all of it. Christopher would have no problem getting “into the head” of a character and becoming that character because he has the ability and discipline needed to study that character and become very interested in motivation. Christopher has said that he rarely turns down a role because he finds each role “a learning experience.” Christopher would have a love of learning with his planets in air signs. Motivating him to action are his Sun and Mercury in Aries and Pluto in Leo. He has Venus in Taurus in its home keeping him grounded and Jupiter in Cancer to protect his personal life. Christopher has a record like none other at playing interesting villains in movies that he takes.

Among Christopher’s more popular performances he has roles in “King of New York,” “Batman Returns,” “Pulp Fiction,” “The Prophecy,” “True Romance,” and appeared in “Sleepy Hollow” as the villain. With Pluto in Leo supported by his Sun and Mercury in Aries, Christopher applies the “dark side” to characters with excellent timing gained from his Air Trine. Christopher is also a dancer and loves to dance as he once told a colleague of mine. He has said that he “wished he could dance again” before he did his famous award winning video with Fat Boy Slim, “Weapon of Choice.” Aries often needs an outlet that is physical and Christopher started out as a tapper; his Leo planet would love the drama involved. In the days of Christopher studying dance it was very common for boys to study tap as it was seen as a more masculine dance form that some of the others. Christopher has been supportive of dancers throughout his career and has appeared in music videos besides that which won him his award.

Again, a thinking man with a gift of timing which I often see in Air trines, Christopher loves comedy and has appeared on Saturday Night Live seven times and is said to have an open invitation to appear there whenever his schedule permits. Comedy requires a gift for timing, as does dance, and Christopher applies his offbeat timing to comedy as well as his roles on the screen. A thinking man, Christopher has fans of all ages and with Moon and Mars in Aquarius he often appears one step ahead of the audience or one beat ahead in the dance.

With Cancer Jupiter, Christopher would guard his personal life well and that is the best way to play it if you are in the public eye. Christopher has been married to Georgianne Walken since 1969. Georgianne is a casting director most well known for “The Sopranos.”

Christopher’s style is one of a “smart dresser.” Not only does he dress “smart” for occasions but he is smart about how he dresses. Christopher looks best in tailored suits that are cut to his thin body with a pronounced waist and that is how he appears more often than not. As is the case with people with Aquarius prominent in their chart or a lot of air, the eyes have it when it comes to Christopher’s look and acting. His eyes are interesting and he keeps his hair cut to expose and flatter the eyes and draw attention to them. He often acts with his eyes and is known for it. When appearing in public Christopher chooses ties that set off his eyes knowing, with an active Leo, that they are a feature that draw people in.

Christopher’s Leo Pluto is connected to his Aries Sun and Mercury so his hair is important to him and he always his it styled just a bit “off,” and different which a Leo takes pride in. Most often, Christopher appears in a trim black suit with an interesting color shirt at red carpet events or a black tux. On his off time he often is seen in a collar which is another trait of a person with Leo in their chart. A dancer, Christopher would be sure of what makes him look best and stay with his “uniform” of choice and that works for him. He is also a fan of the turtleneck which sets off the face and is another trait of a strong Leo placement. With his hair combed off his face and back, he accents his face and his eyes and in wearing black he brings the eye back to the face. This style that is Christopher’s trademark can be the “uniform” that Aquarius often finds for themselves (Moon, Mars) and sets him up for close ups (Aries Mercury/Sun, Leo Pluto).

Almost everyone has a favorite Christopher Walken scene or role that he has played and if you have one, feel free to list it so others can remember it. Christopher has a new release shortly so we will see his uncanny timing and ability again shortly this year. Since Christopher says he will not turn down a script he can do, we can expect more from this actor in the future.