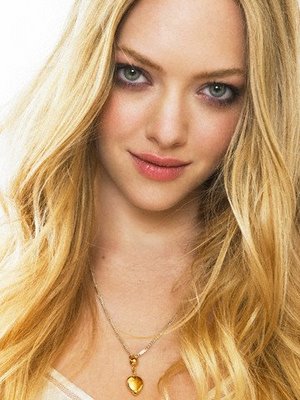 Sagittarius Amanda Seyfried is a refreshing young actress who just starred in “Dear John,” and has three films in production. A regular on the series “Big Love,” Amanda has said she is interested in exploring her film career more and may or may not continue on the series. Amanda has dramatic Leo Moon faring well with Uranus, Sun, Saturn and Mercury in Sagittarius She has her Mars in Libra and her Venus in Scorpio. Amanda is a singer, a former model and an actor and has starred in films such as “Mean Girls,” where she was noticed and “Mamma Mia,” with Meryl Streep. With her other work in films and all the work in production we can see she is well on her way towards a successful film career and perhaps a career in music.

Amanda has both sex appeal, (Venus in Scorpio,) and has been described as “luminous.” She shows the Sagittarius need for different experiences in her choices of film as they stack up to be both musicals and romantic leads as well as character roles. With Moon in Leo we can expect her to not only show up on screen with that mane of blonde hair and wide eyes but to be interested in drama and in acting deep within herself. She has played very different parts in film and on television and is showing us a Sagittarius range. I feel it is no accident that she made her big screen debut in a romantic lead with Mars in Libra. Mars in Libra gives us a romantic type character for Amanda but she also has her sexuality to tap into with such a Scorpio placement in her chart. She began modeling at a very young age and finished with it early on as we would expect from a Sagittarius with a stellium in Sag. Sag needs to speak and likes to believe in what they do so we can watch Amanda as she comes out of the gate to see if she plays up her Libra Mars or her Scorpio Venus in her roles. She also has Pluto at home in Scorpio and this should have an effect in her choices of film roles as well. We can expect her to have to believe in her work and she certainly seems committed to her role in “Big Love.”

Jupiter is in Aquarius and I believe we can see this in Amanda’s “otherworldly,” presence on the screen and we can see her interest in unique moves in her career by her choice of very different roles each time she does a film. She has become involved, for example, in a role based on a comic, Marmaduke. She also shows an open mind by being involved so successfully in “Big Love,” and an interest in how other’s live and other cultures. With Mars in Libra and Jupiter in Aquarius when one is a stellium Sag we can expect many different roles for Amanda and for her to shine, (Moon in Leo,) in character. Amanda is set to do a comedy based on an Oscar Wilde work along with Sean Penn and Annette Bening as well as thriller in the future.

A Sagittarius is hungry for different experiences and I believe Amanda is no exception to that rule. She has lined up a group of films that she will appear in closely following her movie “Dear John.” She also has her musical ability to draw upon which she used in the movie “Dear John,” as well as in “Mamma Mia.” Amanda recorded five songs for “Mamma Mia” and did a song for the sound track of “Dear John,” so she is not letting her singer-songwriter roots fade, she is using her chops when doing film This will give her a wider range, (Sagittarius,) as a performer and she has managed to work her music into her film career thus far.

Amanda’s Leo Moon is very apparent in her look as is her Mars in Libra. She appears very often in color when on the red carpet and frames her well made up face with her halo of beautiful hair, (Leo.) She has done bikini shots; a nod to her Venus in Scorpio but keeps it lady-like for the most part due to that Mars in Libra and Jupiter in Aquarius. I believe we see an Aquarius influence along with Libra in her choice of gowns as she seems to glow and wears gowns that shimmer and are in keeping with the Leo love of being a center of attraction. She has appeared in baby doll gowns of shimmery fabric and bright, somewhat conservative cuts in gowns as well.

Amanda can wear almost anything but I don’t see a lot of the Scorpio black coming out when she attends events. However, in doing thriller movies we can see her Scorpio and Pluto being played out and I believe we will see more of it in the coming years. Amanda does a lot of head shots in keeping with her Leo Moon and they flatter her face and hair. She is a rare blonde in that she is fond of red lipstick and I think we can site her Scorpio Venus in this style. Often she appears with very little eye make but red lips and very blonde hair. The style of using red lips is very sophisticated and with such a Sagittarius chart with Libra and Scorpio helping her pick a style I think it matches her personality to play with dark lips and subtle eyes and gives her a very sensuous look. She plays with her hair in styles that flatter her in most shots and this is very Leo like. Her Moon in Leo is very active in her life with a stellium of Sag setting it off and it’s natural love of glamour and drama.

I profiled Amanda because I believe we have an artist on our hands that will continue to produce interesting work given her chart and it’s love of exploring as well as the natural Leo talent at drama. Amanda has shown herself as a triple threat, given that she is an actor, singer and songwriter. I believe she will be doing a lot in the future and possibly will leave “Big Love,” to pursue her acting career more fully. Amanda is a “go getter,” with an interesting chart for producing art and I think we will be happy with what she has to offer.