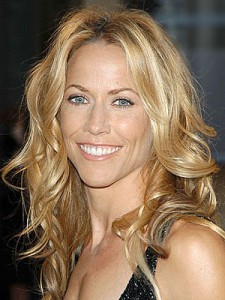 Eclectic Singer, songwriter and actress, Sheryl Crow is an Aquarius with a chart set to succeed in what she does. Interested in liberal politics, Sheryl makes statements in her music and also does charity work a great deal. We can begin by looking at the sheer volume of her 10th house which includes her Sun in Aquarius as well as Saturn, Mars, Mercury, Jupiter and Venus all in Aquarius. We would expect a great deal of bizarre behavior from those planets if they were not in the 10th house of career, earth and the public eye. Also grounding the Aquarius are her rising in Taurus as well as her Moon. Pluto is in Virgo supporting her Taurus placements. Sheryl knows her “roots,” and is involved in the roots of music and has one eye on the politics and needs of the people since she would be a huge humanitarian with all that Aquarius, especially in the 10th. Sheryl collaborates with many artists her senior and always has and this is because she has a packed 10th house showing her the large amount those with experience can teach a person.

Sheryl’s father played the trumpet and her mother played the piano. Sheryl, with so much intellectual energy, studied for a great deal of time compared to some musicians as she collected a degree from the University of Missouri in Columbia which was a BA. She joined music groups in college and was later awarded an honorary doctorate from Southeast Missouri State University. Valuing education while in school, Sheryl joined the National Honor Society, the Future Farmers of America while receiving her degree in Music Performance, Composition and Education. Sheryl began by teaching music. We can assume that her education was very important to Sheryl being that she is an Aquarius with so many planets in that sign but also knowing that those planets are in the 10th house of achievement and her Taurus rising and Moon would be looking at the security of having an education in one’s area of interest.

All of this education set Sheryl up to collaborate with artists that had many years in the business and she collaborated with artists such as singing backup for Michael Jackson, and working with Stevie Nicks, Clapton and Keith Richards just to name a few. Sheryl is also very skilled at “remakes,” when she takes songs that come from great writers and singers such as Cat Stevens and re-records them. Sheryl has done many, many remakes and many, many collaborations showing us how she feels at home with her “clique,” as an Aquarius does. Sheryl has recieved 8 Grammy awards and has recorded music and songs for movies and commercials. It is obvious that Sheryl lives in that special world of music and is a musicians musician because she has worked with so many other artists and does so with ease and a seemingly happy vibe. An Aquarius will find their “people,” and Sheryl reached out with all that 10th house energy and found hers.

Of course, a humanitarian, Sheryl has done work for many charities and with a strong 10th house, she has become involved in politics. She has been involved with the Scleroderma Research Foundation since the 1990’s and has been active with regard to breast cancer since she herself suffered from breast cancer and is a survivor. Sheryl participated in protesting the war in Iraq, even wearing a guitar strap during the Grammy Awards that said “No War.” Sheryl has also donated money the the United Nations World Food Programme. With her rising in Taurus, Sheryl would be aware of the need for basics for people and value them and with a packed 10th house of Aquarius planets it is no question that Sheryl cannot help but speak out when she has something on her mind with regard to people and her thought process. Almost completely a tenth house Aquarius, Sheryl will continue to speak her mind and stay with her own “crowd,” meaning the musicians she has worked with and continues to work with. Sheryl has recently done more collaborating and will probably stay close to those with more experience even as she becomes the one with the experience. Sheryl has also worked with younger musicians sharing her knowledge and this also falls in line with her chart.

As for Sheryl’s style, we see “Eclectic,” first and foremost. She also has one eye on politics often when she dresses as she will often wear Indian accents on her outfits as a nod to the American Indians. With all those planets in the house of Capricorn and Cappy’s loving a uniform as much as an Aquarius, Sheryl has her own form of uniform when she works. Uranus, certainly Sheryl’s planet is in Leo and Sheryl has that mane of hair that she keeps high and low lighted and long and hanging. One can see she takes great pride in her hair and she would with this placement. She wears natural make up and that is part of the package and uniform we see Sheryl in most of the time. She is fond of close fitting jeans and vests or shirts and close fitting jackets or jackets with American Indian leanings such as fringe. Sheryl gives off a natural look in all she wears and is very seldom in a dress when appearing on stage and only seems to wear a dress when she appears on the rare red carpet.

Sheryl has a very small body that she keeps in shape and shows off her arms and upper body quite a lot. Using a guitar will keep your arms working and one can see that in Sheryl. Sheryl most of the time sports a tan which makes her able to wear any color but she leans towards the natural colors such as tan and browns. Sheryl is fond of simple halter tops and bra tops but never in bright and flashy colors. Her uniform is that of a “musician,” of the classic type which is a pair of jeans, a T top or halter and a jacket which is usually one that is embellished. This has been the look of rock musicians for decades and it is the uniform Sheryl applies to her life and it is probably because it allows her to work comfortably and allow her to avoid fussing over her clothing. Again, she often wears that Leo mane of long hair in it’s naturally curly state keeping with the “no fuss, no muss,” reality.

Sheryl is becoming the woman with the goods when it comes to music and as she starts to collaborate with more and more younger musicians she will continue to be as relevant to those that are new to music as she is to those that are accomplished musicians. I think that most of what Sheryl touches will work for her since she has the education and background for whatever she chooses to do and the experience to pull just about anything off. I expect to hear more and more from Sheryl as music of her genre never dies and is loved by many people all over the world.