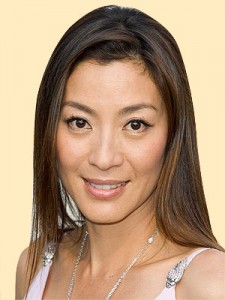 Michelle Yeoh is also credited in earlier films as Michelle Khan. Michelle is a Leo with Mercury and Uranus also in dramatic Leo. Her Moon is in lady-like Libra, Venus is in Virgo and Mars is in curious Gemini. Her Jupiter is in dreamy Pisces.

Michelle started out as a serious dancer and went so far as to study Ballet in the Royal Academy of Dance in London. This passion for dance came in handy for Michelle when she took action roles for she could do all her fighting scenes and wanted to do all her stunts but was not insured to do so. She could rely on her dance training to take her far in movies such as “Crouching Tiger, Hidden Dragon,” and some work with Jackie Chan.

Michelle suffered a spinal cord injury while dancing and changed her major: she ended up with a degree in Creative Arts and a minor in Drama which is in line with her large representation in her chart of Leo.

Michelle, at 21, was named Miss Pageants Pageants are the home of many who have Libra in their charts in a prominent way and Michelle’s Moon would make a pageant a homey atmosphere for that Moon.

With Mars in Gemini, the Moon in Libra and Saturn in Aquarius Michelle would be somewhat intellectual and give her an interest in higher education regardless of her love of drama shown by all her Leo. She would be a thinking person as well as a feeling person and she applied both in her educational career. Later, Michelle would begin her career with action movies and use her dance to learn martial arts moves. Michelle did the James Bond movie “Tomorrow Never Dies,” and Bronson described her as “serious and committed to her work,” and I think we can assume that was the truth considering her chart. She was a Bond girl which falls very much in line with her Moon in Libra supported by her other Air energy.

Beauty shows where Libra is and Michelle is no exception to that. Michelle later took a graceful role in “Memoirs of a Geisha,” using her talents to the fullest. Michelle’s Jupiter is in Pisces and her Neptune is in Scorpio adding to her sensuality on and off the screen.

During her career Michelle did ads for Charles Jourdan, tying her into fashion which is also compatible with Leo and Libra and ended up marrying the head of the company, Dickson Poon. Michelle, with a Libra Moon backed by so many air signs retired from acting and only returned to the screen after divorcing three years later. This shows that Michelle, like many Libra Moons, takes marriage very seriously for many actors marry but not many retire to focus on their marriage when they do.

With Pluto and Venus in Virgo Michelle is a hardworking actor and has released three films in 2008 and three films in 2010. Her Virgo placement also lean towards the “lady,” image and makes her somewhat of a perfectionist which a dancer can be especially when majoring in Ballet. Since we know that Michelle still uses her physical skill when she works and has converted a lot of her ability into martial arts moves we know that she is not only physical, (Virgo,) but also very graceful, (Pisces,) and presents herself beautifully in and out of her chosen roles. Michelle is not afraid of hard work and this shows in her choice of roles and in her doing her own stunts whenever possible. Bronson called her the “Female James Bond,” for her ability in the movie he shared with her.

Michelle’s personal style is not only that of a lady but she takes into consideration beauty when she dresses. Typical of a Leo leaning we see her hair as a mane and always well taken care while worn more down than up. She takes a lot of head shots which again, is typical of those with strong Leo in their charts but those shots are not edgy and “out there,” but more beautiful and leaning towards stunning in a way that is lovely and not shocking. Michelle’s coloring will support many colors of clothing and she wears many different colors but does favor the dramatic and very Leo/Neptune in Scorpio black dress. As a Leo with Pisces she must enjoy the outlandish costumes she is able to wear in her action films and she enters the roles fully and with all of her body so we know that she is present when filming her work. She has appeared well in silver in movies and the classic black battle costuming.

When on the red carpet Michelle wears color and red is popular with her as well as other jewel colors. She looks glamorous and this is due, most likely to her Sun in Leo and her Moon in Libra. Michelle is open and accessible to the camera, (Leo,) while giving off a “nice,” smile that shows us her Libra Moon. She is comfortable in all clothing she wears because of her dance background and is fine in heels when making an appearance. Where there is dance there is modeling and Michelle has done some modeling and may in the future. She is well turned out on the red carpet and photo ready. (Leo and Libra.) In tight costumes Michelle would have so much experience in tights that she would be very much at home. Her body movements would be very calculated and exact, giving us a great show for our time when she is in an action film.

A thinking woman, I suspect we will see even more of Michelle. She does have three movies coming out this year and this shows us that she is in “work mode,” and working very hard. Because of the perfectionist in her and her grace and talent I see her career building as there are more and more roles opening up for her. Being as Michelle learned English early there are many opportunities for her in the future as there has been in the past.