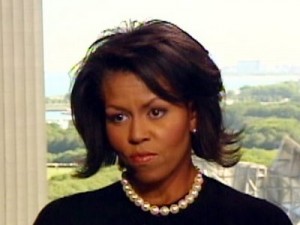 Michelle Obama is a Capricorn Sun with a Pisces Moon. Her Capricorn Sun is joined by Mercury in Capricorn and they are supported by Uranus and Pluto in Virgo. With an emphasis on Earth signs, Michelle is somewhat conservative in her style and what interests her. With Capricorn so prominent in the chart there is an interest in public leadership. Michelle also has a strong Pisces presence in her chart with Pisces Moon and Venus conjunct. Her Pisces sensibilities show in her style of life and person and are as visible as her Earth leanings.

Michelle has Mars and Saturn in Aquarius giving her a humanitarian energy and a unique style that is all her own when it comes to her lifestyle and personal style. With Aquarius Saturn and Mars Michelle could not help but march to her own drummer many times but keep one eye on the public’s opinion. Neptune for Michelle is in Scorpio giving her a sense of others as well as a touch of sexuality in her dressing that is often absent in regard to First Ladies. Michelle has Jupiter in the strong sign of Aries giving her energy and a leaning to do her own thing with a nod to creativity and physical energy that can be seen in her life. With her Moon/Venus conjunction in Pisces we can expect to see a strong Pisces leaning in all that she does even as she applies it to conservative pursuits that suit her Capricorn Sun and Mercury. With both Pisces and Virgo in the chart we expect to see both the creative and practical coming from Michelle as well as someone who is a thinker as well as someone who follows “feelings.”

Michelle claims to have come from a “conventional” background with “mother at home” and “father at work” with “dinner on the table.” We could expect this convention in the background of a Capricorn Sun as well as a leaning toward the same lifestyle from Michelle herself with her own family. Michelle was committed to traveling when her children could accompany her during her husband’s campaign and is said to have not wanted to spend nights away from her daughters. She seems to want to keep the “convention” in the lives of her daughters even while in the White House as she still values family outings and dinners with her husband and children and holds such events in high regard while placing an importance on having experiences as a family.

Michelle’s Pisces Moon and Venus are seen in her commitment to poverty awareness. Her Virgo leanings are also seen in her interest in healthy eating, especially when it comes to children and healthy diets. The Virgo interest in health can also be seen along with a strong commitment to helping people who are in need when we consider that Michelle worked for the “University of Chicago Medical Center” before her husband won the White House. A Pisces is often drawn to the medical field, especially in the area of administration as would her Capricorn Sun. Her Virgo planets are shown in her interest in health care and in working for a hospital. She also shows her tendency toward public leadership which many Capricorns have by her working for Chicago Mayor Richard Daley before she became First Lady. Michelle had shown her tendency toward helping others that come from planets in Virgo and Pisces early on while staying in line with a Capricorn Sun that is interested in rising in their career and in public life. It must have suited Michelle to love and marry a candidate for public office and she would have been a likely partner in his pursuit of any public office during their marriage given her chart. With Saturn and Mars in Aquarius Michelle would also be satisfying her unique style of public humanitarian interests as well as energy that is both different and yet includes helping all people. She has an interest in helping African American people as well and we would expect her to be somewhat personal in her interest when it comes to public aid with such Aquarius placements. Still, since we are dealing with Aquarius Saturn and Mars, Michelle would be interested in all people of all nationalities.

Michelle’s style is also indicted in her chart when we consider her tendency to dress both in “off the rack” and classics from places like J.Crew. She shows her Earth signs in this choice of clothing from such a store like J.Crew in both the practicality of the clothing and the conservative cut. We also see her Pisces love of art and creativity when we look at the designers that Michelle is likely to wear when she attends public events or is traveling to other countries. Michelle is likely to try new designers and young designers that often benefit from her wearing their clothes to such public events. She would have to have an “eye” for picking new fashion that is likely to be popular with the public as well as have the “everyperson” view that her Earth signs provide her.

Michelle has “broken” some designers that were otherwise off the map in regard to the people like Jason Wu whom she wore to a extremely public event like the inaugural in 2009. In her choice of a relatively unknown designer to something so public as the inaugural we can also see her Aquarius Saturn which showed itself to to both conventional as well as unique in the fact that the dress was both a classic princess cut but also bared her shoulders and had one strap instead of two which made it unique. Her Pisces Moon and Venus were also at work in this and other choices as it brings public awareness to American designers who otherwise might go unnoticed except by fashion insiders. Aquarius Mars and Saturn manifest in her style as Michelle choses new or somewhat unknown designers as well as in her now public leaning toward bare arms that is very unique when it comes to women in politics, especially those in high level positions who normally wear blazers and jackets with their outfits.

The artistic side of Michelle comes on strong in her showing her arms because they are an attractive feature of hers that is her own but also we see Mars in Aquarius in her bare-armed style because she began her run as First Lady by being criticized for that very choice. Michelle continued her style of “low end” with new and different “high end” clothing along with showing her arms freely until she became admired for it and even copied by many women when the style finally became accepted. Michelle was often panned in the beginning of her run as “First Lady” for not wearing the classic suits that are so popular with those in her position previously and leaving off jackets that could be worn with her dresses. Instead Michelle went with what looked right on her body showing her Capricorn Sun’s ability to lead along with her Mars in Aquarius and Moon/Venus in Pisces. Her nod to affordable clothing by wearing “J.Crew” makes her assessable to “every woman” as well as unique as most First Ladies are dressed by one or two designers that they become close with while they are in the White House. Hillary Clinton, for example, became very close with the designer “Donna Karan” and had many suits made for her in every color to give her a working wardrobe.

Michelle Obama continues to pick different styles and designers and this causes her to be compared to “Jackie Kennedy” who also had her own personal style. There is a great difference though when it comes to Jackie Kennedy and Michelle Obama when we consider that Jackie favored clothing made solely for her own use by designers that “knocked off” French designs and made them in America for her. Michelle chooses her own American designers and wears her clothing “off the rack” meaning that although she may need tailoring for her wardrobe it is largely available to many women. We see a practicality here in Michelle’s “off the rack” style and a nod to her Capricorn Sun and planets in Virgo. Michelle is also never fussy in her choices of clothing and style.

Michelle Obama’s style is one that every woman can use if they choose to mix those clothes that come “off the rack” and search out their own new designers that are often affordable and can be found in every price point. Dressing for one’s own body type in a style that compliments them, every woman can carve out her style in fashion in the way the Michelle Obama has. In this way we can see Michelle as a style icon that can open doors for other women.