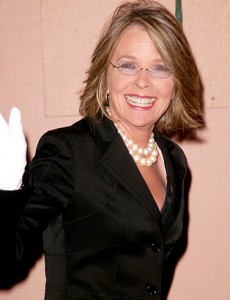 The very talented actor, Diane Keaton is a mixture of natural talent and hard work that has led her to be one of the most respected actors of our time. Diane is an Academy Award winner and has been nominated a minimum of four times for the honor. Diane has a style that translates to the screen and this is, in part, due to her Moon in Aquarius opposing Midheaven and Pluto in Leo helping her to understand both the dramatic side of her chosen career and the association to most people.

Diane’s Mars and Saturn in Cancer oppose her Sun and Venus in Capricorn and this balance can serve to help her understand the insides of the characters she plays, but also it has hindered her ability to make a stable marriage and slowed down her settling into a family situation of her own. Her Uranus in Gemini trines her Jupiter and Neptune in Libra creating a grand trine in air with her Sun and Venus. Diane has attempted to take the thinking woman’s roles that are offered to her and is a thinker in her personal life as well when it comes to her career and what it means to her to be an actor.

Usually cast in a good script, Diane partnered with Woody Allen whose movies are always about the thoughts of people and this suited her greatly given her chart. Diane has Scorpio rising giving her an understanding of power and a great deal of talent when partnering with others during her film-making. She has said that she works just as well as her relationships with the other actors work. Clearly an actress that works from the inside out, she takes on the unique roles that only an Aquarius Moon with an air trine would adore. Keeping in mind her practical Capricorn Sun and Venus, Diane has also stayed within her strongest traits when taking roles and has chosen wisely for herself showing that she knows herself quite well. Mercury for Diane is in Sagittarius giving her a larger view of people of all sorts and making her a bit more honest when dealing with herself in the press and in her career as a whole. Diane has stayed true to herself and her chart in her life and it shows in the catalogue of films that do her great credit.

Diane is a stage actress, a movie actress, director, producer and writer. She began her career on stage in school as an actor and quit college to go to Manhattan to work on her career. Her breakout performance was in “The Godfather,” but she would build a great deal of work with Woody Allen early in her acting life. She did many films with Woody Allen including “Love and Death,” “Sleeper,” and “Annie Hall,” where she won the Academy Award although she has been nominated more than a few times. Diane went on to move from comedy to taking roles in films that were successful for her in movies such as “Looking For Mr. Goodbar,” “Reds” and “Marvin’s Room.” Diane has also “The First Wives Club” and more recently “Something’s Gotta Give.” Diane had a hit on her hands once again in “Something’s Gotta Give,” at her older age showing herself as the long-working Capricorn she is and she enjoys it, no doubt, with Venus in Capricorn as well. Diane’s interests extend to photography, which is a favorite of many with Leo in their charts, and real estate which is a Capricorn’s domain a lot of the time.

With opposing Cancer planets in her chart in the 8th house and Mars being one of them, Diane has had a bit of a hard time finding a partner, although she did date some of the most famous actors of our time. She has had relationships with Woody Allen, Warren Beatty and Al Pacino and must have handled herself with Capricorn integrity since she counts these men among her friends to this day. After years of off again, on again relationships, Diane, at the age of 50 and after the death of her father (the father always playing an important part, good or bad, in the life of a Capricorn), adopted two children on her own and became a single mother. In 2001 she is quoted as saying, “I don’t think that because I’m not married it’s made my life even less. That old maid myth is garbage.” This quote reminds me of the Capricorn independence and responsibility for oneself as well as the Aquarius Moon taking a route less than conservative in their personal life.

On having children, Diane is quoted as saying, “Motherhood has completely changed me. It’s just about the most completely humbling experience I’ve ever had. This statement tells us what we can see in the chart and that is a person who takes her responsibilities very seriously and has the other person in mind at all times with her planets in Libra, her Scorpio rising and her opposing planets to her Sun and Venus in Cancer. Diane would likely take motherhood and family very seriously and she appears to do so.

Diane has a very unique style and I believe it’s due to her placements in Capricorn wanting to love a “uniform” that is easy and on the conservative side as well as to her eccentric Aquarius Moon that would drive her to make her own statement when it comes to what is on her back. She also has Leo in her chart and that helps a person pull off a sort of costume and make it their own while still honoring her Libra sensibilities in looking pulled together. Diane favors menswear even to the point of buying men’s fashions and putting them together with women’s clothing or having them tailored to her. Her style in “Annie Hall” was widely copied and made her a fashion star for a turn as well as showing her to be her own person in her look. She is tall, at 5’8″ and thin so can pull off a pant or suit look with great ease, and the movement it allows her is matched by the respect it can win her for wearing such “no nonsense” clothing. She has twists on this men’s look in accessories that suit, like scarves and even hats at times. The look she sported in “Annie Hall” was largely taken from her own wardrobe so we can see how she presents herself in her personal life from that film. She wears her menswear with a woman’s touch and it flatters her in an interesting and sexy way when knowing she has Scorpio rising. A Scorpio rising can make any clothing sexy when one thinks about it and Diane has done just that. One has to admire her creativity when deciding on her personal style as well as perhaps take a page from her book when we think in terms of how women dress.

Diane keeps her hair almost wash and wear in a cut that is most flattering on all face shapes and that is a length that is chin length or just a bit longer. This length has been known to fit almost anyone well and she is not one to muss and fuss with her hair, staying true to her Capricorn wish for “no nonsense.” Diane favors white and black when it comes to her clothes further making them non fussy and even in a skirt she tends to wear a crisp white shirt which should be in every Capricorn woman’s closet or any woman with Capricorn strongly in their chart. A crisp white shirt can be modified for the occasion and worn with a fine black suit or tux easily as it can be worn a bit open and with a skirt. Diane takes no chances with her look while taking the ultimate chance by dressing in a more masculine way! It suits the strong character of Diane and fits her approach to life as well if you look at her chart.

Often wearing glasses instead of contacts and being not a fan of plastic surgery, Diane is a great example of embracing aging and making the best of oneself at any age. That Diane could do such a completely successful film such as “Something’s Gotta Give,” and it being a romance, shows us that Diane is interested in breaking new ground still in her choice of work. Diane has played vulnerable and strong but in doing both has maintained her self esteem as an artist and stayed true to her craft.

A Capricorn is known for loving a belt and Diane will often belt her wide skirts showing off her small waist but not needing to wear clinging clothing to appear attractive. She keeps her face able to convey emotion by laying off the plastic surgery and so gives a believable performance when she does a piece.

We can expect Diane to keep working as all Capricorns will, especially when Venus is in Capricorn as well. She will take a stand where she sees fit and not be afraid to speak out in the press. We can all learn a bit from Diane and “know thyself” is one thing that shines from Diane’s career!