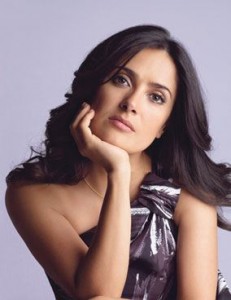 Virgo Sun Salma Hayek is the first Mexican National to be nominated for the Academy Award. While Salma has Moon in energetic Aries, she has a large stellium in Virgo which includes the Sun, Mercury, Pluto and Uranus. Salma shows her Virgo stellium in one way by being very active in charities that benefit battered women and children. Salma’s father is Mexican of Lebanese descent and her mother is Mexican of Spanish descent. Salma did not live in Mexico her entire childhood and spent some time in school as a child in Louisiana where she was diagnosed with dyslexia and was an accomplished gymnast. Later she lived with her Aunt in Texas until she was 17.

Salma attended college but surprised everyone when she left university to study acting. Salma was following her own heart when we consider that she has Venus and Mars in dramatic Leo. The combination of her Virgo and Leo planets make Salma a thinking actor and she is also a producer of television and film and a director. Salma is the producer of “Ugly Betty.” Salma has Jupiter in Cancer and Neptune in Scorpio both helping her understand emotion and how to convey them to others. With Mars and Venus in Leo we can be sure that Salma pours both her love and energy into acting and producing entertainment. Salma even directed a music video for Prince!

Salma had somewhat of a language barrier early on but with her huge intellectual ability and hard work shown by her Virgo stellium, she worked very hard to overcome her dyslexia and become a major American actor as well as a popular Mexican actor. She studied acting under Stella Adler. We can be sure that Salma would be somewhat of a perfectionist with all that Virgo and that she would apply it to her acting with Mars and Venus in Leo. Salma starred in some major films after her hard work when she was young to overcome her disability. Salma had early roles in “Desperado,” “Fools Rush In” and “Wild Wild West” among others. Later she would have more roles in films like “Traffic,” “Frida” and “In the Time of Butterflies.” She would receive an Academy Award nomination for her work on “Frida,” which Salma co-produced. Frida was a success for Salma and we can certainly see her intellectual capacity in that role as well as her acting chops.

Salma is an actor that studied acting and we can look to her Virgo stellium to see why she chose to study under one of the best! Salma produced and directed “The Maldonado Miracle” and won an Emmy for the Showtime movie. Salma would have great skill when it comes to organizing and directing with planets in Virgo and Leo and her Moon in very creative Aries. Her Moon would also lead her into producing and directing with a very powerful back up from Venus and Mars in Leo. With Moon in Aries, Salma is most likely a self starter who looks for projects she can really apply herself to and when she does find a project we can be sure she works hard at it!

Salma is executive producer of “Ugly Betty,” and also guest-starred on the series. She has been very successful with this series and has won both an Emmy while the show won a Golden Globe. Salma continues to produce Spanish speaking work as well as her American work. Her Aries Moon and it’s strong Leo back up with Virgo hard work keeps Salma busy in many areas such as being the face for Revlon and Avon and receiving singing credits in three movies! Salma has also done some Spanish speaking commercials for Lincoln cars which seriously rose sales for the car among Hispanics. Salma has her finger in many pies and juggles them nicely with her chart full of talent for entertainment and creativity while adding business sense to the picture of her.

The fashion style of Salma is a creative and colorful one! She keeps her hair in it’s dark natural color which flatters her face greatly and her hair is worn long which a Leo will often do whether they are in the public eye or not! Salma has that Leo look with long and well cared for dark hair that brings out her dark eyes while she applies make up to her eyes to accent them even more. Salma is no stranger to make up and wears color on her face often and it looks great every time. She keeps her lips a berry color to set off her natural lip color and stays within the natural color family in all make up she uses. Not afraid of “updos,” we see Salma in, at times, an American Style or a Mexican style of up do and often with hair accessories. Salma will wear, for example, a flower in her hair and pull it off without effort. Salma shows her Virgo when she keeps her natural coloring but it is also very “Leo-smart,” to keep her hair dark as she has light brown skin and this leaves a canvas for some fantastic color to be worn and some great costuming.

We have to assume that Salma loves dressing with planets in Leo like Venus and she has such an opportunity to wear both great color and dramatic looks in the dresses she chooses. The slate is wide open for her in every way given her coloring although pastels would not be her best look with all that dark coloring. She looks great in her own Mexican heritage style and American style as well. Salma does a great deal of close up’s as well and that can be attributed to her Leo placements. Often Salma appears in jewel tones that are deep and the drama of black, white and red appeal to her. Black, white and red are the most dramatic colors you can wear aside from gold and silver that glitters and Salma stays in this grouping. She looks fantastic in deep blue red and often appears in black, low-cut gowns that flatter her figure which is curvy. Salma is an example of a glamorous woman who wears full-figured looks and never appears too thin in front of the camera. Her curves are part of her look and she flaunts them wonderfully for the camera. The flaunting of curves is also part of the Hispanic heritage and she does it justice when she appears on the red carpet.

With Leo Mars and Venus, Salma wears her hair almost black, in fact, it is the darkest brown available and she pulls this off with genius as well. Her Virgo shows in the way that Salma is always dressed “just so,” and perfectly and her Leo is out for all to see in the dramatic way she dresses even as it appears to suit her in such a perfect way. One’s eye can get tired watching the same kind of gown on the runway and same sort of look so when Salma appears it is a treat to see her twists on the usual runway attire. I also notice that Salma likes to flatter her bust and when I see Jupiter in Cancer that is not a surprise. The looks she chooses to flatter her bust are in good taste and sometimes in the character of the role she played if appearing at an opening of a movie she has done.

Salma, smartly, very rarely wears necklaces and leaves the decorating of her neck to the gown she has worn and this is a great idea for you if your dress has a great top you will be over dressed and taking away from your beauty to wear a necklace. Very often it is better to forgo necklaces and Salma is a perfect example of this. She does wear earrings when she wears her hair up but never falls into that hole a dark-haired woman can fall into by wearing too much jewelry when they look wonderful as they are. Sometimes less is more and Salma knows, as a Virgo, that she is best natural and looks best by flaunting her natural coloring and figure. With Aries Moon one would assume she is very certain about how she wants to appear and Leo Mars and Venus would be helpful in making that decision so she has it covered.

Salma has a new movie about to come out and that is not surprising. With Aries Moon, a stellium in hard-working Virgo and Leo in her chart we can expect more entertainment from Salma both in front of the camera and behind it. Because she has her own production company, Salma can choose to do work she thinks is worthy and she has the chart to see the trends and know how to stay in the game. I suspect that Salma will wow us again very soon!