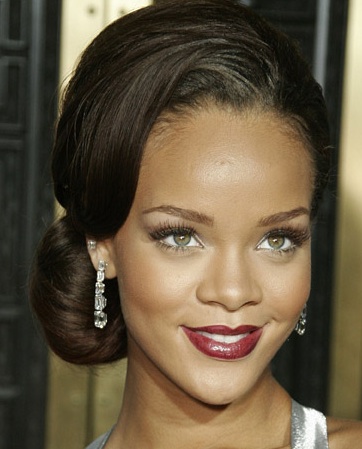 Charts like the woman-of-the-moment, Rihanna’s come easy to me because of my own birth chart. Rihanna is a Sun sign Pisces with a stellium in Aries that we can see from the top of her head to the tip of her toes. Her style is a blend of these signs with a bit of influence from other placements in her birth chart.

One notices Rihanna’s eyes immediately and they are deep Pisces eyes that often are there to mark a Pisces sun. She makes them up to be the focus of her face and that is often a Pisces trademark; they can make up their eyes like they have been doing it forever. Swimming eyes that are deep are Rihanna’s.

Rihanna has short hair and that is an Aries style because it’s “get up and go.” It also works for a Pisces because when one has short hair the eyes become the focus or they should be. Rihanna wears a heavy dark eye makeup and that becomes her and works perfectly with her choice of hair styles. She is also “Aries quick,” when it comes to applying hair pieces that she blends with her dark hair to get blond highlights. Hair pieces are quick, easy ways to get another color to highlight your hair without all the damage that bleach can do to dark hair. Her hair suits her personality perfectly and the “pixie Aries,” person shines through. Her stylist must be very proud!

With Aries Moon, Venus and Jupiter, Rihanna is a mover and a shaker who comes out of bad times fairly quickly and bluntly faces her problems head on and in the open. Instead of the hidden, deep way of dealing with pain, Rihanna came out publicly as an Aries would and opens up about what she is dealing with. When she had problems in her relationship she was in the press giving quotes and dealing with things in interviews. This is healthy in many ways because turning inward as Pisces can do will possibly make the problem grow before it is faced. Rihanna is a fly-in-to-it personality with her Aries Moon. We can also surmise that she might get into situations, especially when young where she, unfortunately, has to deal with aggression. Instead of being a victim when Rihanna came up against aggression, she dealt with it and continues to deal with it. She openly shares herself with the public and that can also be due to her Neptune, and Saturn, for that matter, in Capricorn. She has an Aquarius Mercury so we know that she is creative and thinks in a wide swath of ideas that include the world as a stage.

Being dark skinned and dark haired, Rihanna can wear many jewel colors but she tends to go with black and white, another Aries tendency that we have seen with other performers. Black and white are dramatic, easy for her to wear and always in style.” One’s wardrobe expands when one wears much black and white for it is easy to match so long as we make sure the blacks are of the same hue.

Still we see the Pisces sun in Rihanna when we see her dress “lady like,” and at times, wear her hair in “updo’s,” that are retro in look. She wears a retro look very well with her features and again, eyes are the key to “updos,” really working for a person. The retro look is also very trendy and an Aries in entertainment is fond of following trends, especially when they are managed well and she is since she belongs to a prominent label. The energy one needs to be involved with a prominent label is what she possesses with all those planets in Aries.

With eyes being the prominent feature for a Pisces and the face being the focus of the Aries, she often has photos of her face and head in the press despite the fact that she is tall at 5’9.” At her height she can wear almost any style and she does. With her hair short she can show off her shoulders and she often wears off the shoulder gowns and dresses or halter tops. Short hair is a way for Aries and other Fire signs to go I often say because if the top of the hair is kept long enough it can be fashioned into many different looks using product. Rihanna uses product to do many different styles with her hair from spiky to soft.

Still in the end we get the feminine womanly qualities a Sun Pisces possesses in mass from Rihanna. She is very feminine and her Aries and Capricorn are accessories to that Sun. My prediction is that because of her placements in Capricorn and her energy with Aries Jupiter and such we can expect more hard work from this musician and that the work will be forward thinking because of her Aquarius Mercury. She is here to stay!