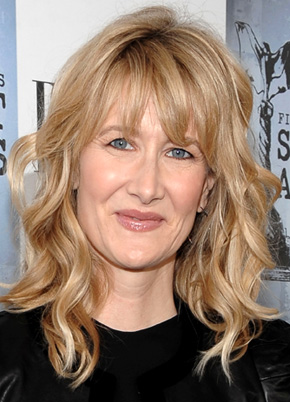 Actor, producer and director Laura Dern is an Aquarius with a huge stellium in the first house in Pisces. In her first house she has Venus, rising, Mercury, Moon and Saturn in Pisces. With all that creative energy Laura started her career as a child and when her mother, an actress, had her banned from the set when she was shooting Laura sued for emancipation.

Laura would have such a large pool of fantasy and character development to draw from and an early successful start in her acting career. Laura’s Jupiter is in Cancer giving all that Pisces energy a boost in the 4th house of home base and has Mars in Libra at home in the seventh.

Laura is married to the musician Ben Harper with whom she has two children. We can assume that Laura is very at home being partnered with another artist given all her placements in Pisces. Laura would “speak,” art and have it around her at all times. It is no surprise that she is an Academy Award nominee and a Golden Globe winner. Laura has a good working relationship with David Lynch and has recieved critical acclaim for her work with him. Laura is an “actor’s actor,” and has been involved in all sorts of films from indie work to blockbusters.

With all her artistic leanings it is no surprise to find Laura’s work spans many different types of roles. She has played roles in “Wild at Heart,” “Blue Velvet,” and “Jurrasic Park.” She was nominated for an Academy Award for her role as “Rose,” in “Rambling Rose,” and appeared in Michael Moore’s “Sicko.” Laura would have compassion for people with such a stellium in Pisces and she shows this compassion by being involved in “Healthy Child, Healthy World.” She shows her attraction to other artists in her high profile relationships with people such as Nick Cage, Billy Bob Thorton and Jeff Goldblum before settling down with Ben Harper. Laura must live and speak “art,” and “compassion,” not to mention her complete ability to take on character, even to the point of possibly becoming some of her characters while filming. Laura’s chart is so rich with Pisces that she must feel Neptune’s placement in the 8th house in Scorpio. Her Neptune with all that Pisces is very much at home and Laura could have some psychic ability along with her ability in the world of acting and taking on roles.

Laura’s Aquarius Sun is shown by her ability and interest in different cultures and lifestyles in her choice of movie roles. Her political interest that can come from an Aquarius Sun is also active as Laura is involved in politics. Her huge stellium in Pisces is fed by her myriad of choices in characters to portray and the large number of actors she has chosen to work with.

Laura shows us that she is able to take on a role completely and appear as well as act like that character she has chosen. When one has such a strong Pisces leaning and an active Neptune in the mix we expect them to live in a sort of fantasy life and the life of such an active actress is a comfortable place for Laura to be. With her strong Cancer placement comfortable with all the Pisces she has shown that she is happiest when associating with artists and has married and created a life with one that is in a different sort of art than herself. I’m sure her artistic sensibilities reach out in all directions and her marriage indicates this as does her large array of roles.

Laura is an Aquarius when she dresses, with a strong Pisces active. Laura wears many different colors and sometimes takes on the character she plays when appearing at openings as she did when dressing for the opening of “Rambling Rose,” where she appeared with a flower in one ear and a southern style dress of a deep jewel tone. Laura mixes it up with color as Aquarius will do, even wearing bright yellow and other difficult colors. We still see her Scorpio Neptune when Laura appears in black often and in finery chooses black using her artistic Pisces eye. A Pisces will almost appear in character when the Pisces is strong and Laura has appeared in western dresses and boots, vintage and white and black tuxedos for women at different times. Laura keeps us guessing so far as what she appears in. We can be sure it has something to do with her latest role or her relationship which has some effect on her choice of clothing when she appears with her family.

The wife of a musician can wear all sorts of looks and be very creative and Laura, with Jupiter in Cancer in the 4th will be affected by her relationship when dressing and doing most things. She appears in casual but creative attire when out with Ben and we see her in jean skirts or jeans and all sorts of creative tops.

Laura prefers bright colors when she wears color and for a blonde that is a strong statement. Laura appears in bright pink, red and deep purple. Many blondes are pastel wearers but not creative Laura who makes statements in her clothing choices by wearing strong color and strong designs. Laura looks at home in her clothing and very happy in dramatic looks. Often on the red carper she will wear a shiny black instead of a matte black and have her very shiny and bright blonde hair showing up against that color. Her hair is playful and creative as well for she wears it in curls which is its natural state instead of straightening it or having it up. Although she wears her hair up she wears it loosely and seemingly without a lot of polish and pulls it off beautifully.

Laura does have films coming out and I think an actor with a chart like this will produce a large catalogue of work and also direct and produce as Laura is doing. She may get behind a camera more and more as she gets older but I suspect she will continue to take character parts as she goes on with her career. She has shown great interest in character acting and is good at it and that is where her chart shows the strength. We can also expect more humanitarian roles for Laura and more charity work as she must have great compassion for people given her Pisces stellium. We can be sure to be interested in Laura’s work when it comes out as she is almost unlimited when it comes to becoming this character or that depending on the script. She has shown she can read and choose scripts that accent her talents well and I expect more of this from Laura.