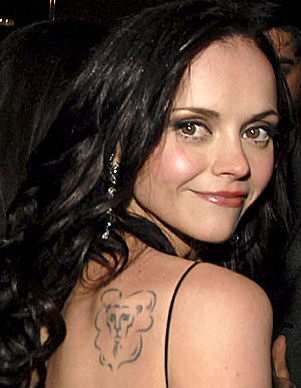 Christina Ricci appears to be one of the more unusual actors of our time given her choice of roles and her appearance as a child in the “Adams Family.” At only 5’1″ she has said of herself that she does not think she is “leading lady” material. Still with careful planning she has come out of her childhood acting career doing roles that have helped her stand out, such as “Monster,” and that are, as she is, unusual. She has an Aquarius Sun. The thing about Christina, however, is that she is actually a very earthy and practical woman.

Christina has Mars, Jupiter and Saturn in Virgo. Her Moon is in Capricorn. This tells us that Christina plans what she does and plots her next move with a large practical touch to what she does. She also has parlayed her childhood experience and her adult experience start her own production company aptly named “Blaspheme” Her production company has produced unusual, Aquarius films like “Prozac Nation,” and “Pumpkin.” She did commercials as a child and finally got her movie break in the unusual film “Mermaids,” with Cher in the lead.

Christina’s Venus, affecting her style, is in Aries. With an Aries Venus and Sun in Aquarius, we can expect some of the unusual and creative choices made by Ricci. Still, she thinks of the bottom line in choosing roles carefully in the category of “independent,” and building a resume’ of characters that, it seems, Ricci “owns.” She is nothing if not practical in all she does and she has built her career despite some of the parts of her life that might be against her success. Aquarius are often genius in their creative ideas and with a push from the creative Aries Venus we see that Christina has found her niche. With Mercury in creative and artistic Pisces all falls right in for Ricci.

Christina has the awful title from some sites as being unattractive without make up. If we look at Christina in different parts of her life we can see the genius in her making herself over again and again. She practically applies cosmetics and hair color to change her look drastically and this would meet her requirements with regard to her whole chart. The creativity in changing looks makes the Aquarius character actress come out and the Aries Venus would be impulse enough to try such looks. Practically speaking it is in her best interests to apply the techniques of make up and hair color to herself to make her who she has chosen to be for each film or chapter of her life. Attractive is in the eye of the beholder and I do not subscribe to statements saying anyone is “unattractive.” I think Christina has done a great job of styling herself well and looks great in all her shots. She is “unusual looking,” and that, to me, is attractive.

With a chart like Ricci’s we would not expect a fashion plate. However, Ricci presents herself very nicely when attending events. She clearly has done well with herself and styled herself in a very good way that works for her. Whether blonde or brunette she stays well dressed when making many appearances and even appears among the “best dressed,” lists that abound out there on the internet. Her Cappy moon would drive her to dress a bit conservative for events and she does but with great taste. She is certainly an independent “darling,’ and that suits her Aquarius nature very well. With careful planning from that Capricorn Moon and stellium in Virgo we can expect more from Ricci and more interesting characters that she can “jump in,” with a Venus Aries which is unlimited in it’s creativity.

Ricci’s private life style is very plain and we should expect what we have which is natural fabrics with the exception of Ricci’s fur wearing which got her attacked by animal rights activists on occasion. Christina once made the top of PETA’s “worst dressed,” list for her wearing of fur. She has pets though and appears to love her animals. She has chosen a not-often-enough thought about charity to be a part of and that is in line with her attraction to the fringe group mentality. Her charity choice is excellent and very worthy though and it is RAINN, Rape, Abuse and Incest National Network! Her style off camera is jeans and the now and again “funky dress,” with pant look. This also falls in line with her chart.

Creative planning is what Christina’s chart shows us and she seems to be doing a very good job of doing just that and coming out ahead!