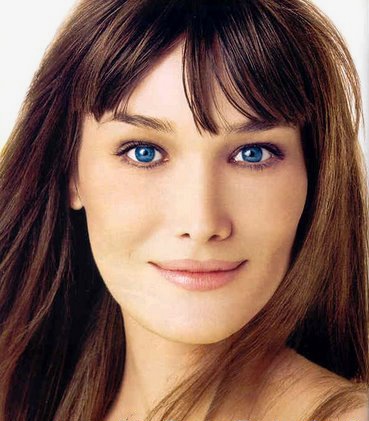 Carla Bruni Sarkozy, model, singer and wife of French President Nickolas Sarkozy is a Capricorn Sun with a stellium in the third house of Virgo planets Jupiter, Moon, Pluto and Uranus. She is a hard working woman who started working young in her life which we expect when we see a Capricorn Sun. More often than not a Capricorn Sun is successful young and is involved in what they want to do with their lives early on.
Carla’s rising is Cancer, opposite her Sun and Venus and Neptune are in the fourth house in Scorpio. Her Sun is hard working in the 6th house and her fourth house Scorpio suggests that Carla is at home with her sexuality and with her body in general. Carla’s Mars is in the 8th and in Uranus suggesting more experimentation. Carla has lived an interesting and somewhat controversial life thus far and with her curiosity and her hard work we can expect more from Carla and she is, in some ways, just getting started.

Like some Cappy’s, Carla’s young life was somewhat dramatic. She was born in Italy but her family moved to France supposedly to escape the Red Brigade. Carla was seven when she moved to France and attended boarding school in Switzerland. It could not be easy for Carla to be separated from her friends and life in Italy and again from her family when she went away from boarding school. Such a nomad life would bring all that hard working and independent Virgo to the forefront and activate her 3rd house of needing to communicate and learn a new way of life.

Carla started modeling at the age of 19. Carla is said to be the biological daughter of a man her mother had an affair with for seven years.

Beautiful Carla soared to the top of the modeling arena and worked with designers such as Dior, Givenchy, Larcoix, Galliano, Lagerfeld, YSL and Versace. While a successful model she dated men like Eric Clapton and Mick Jagger. Her Scorpio planets, especially Venus in Scorpio, MC in Pisces and Mars in Aquarius we can assume played a large part in Carla’s romantic life as well as her relative youth with so many planets in Virgo coming up against older men like the men named here. In 1993 Carla took a nude photo that later, in 2008 sold for $91,000 which was more than 60 times the expected amount. We can assume also that Carla, with Mars in open Aquarius and Venus in Scorpio in the 4th felt secure and open about showing her body and did not expect the photos to have the long term effect that they did in the future.

Carla is a musician and has sold songs, released songs and done videos as well as releasing her own CD’s. She quit modeling to work on music and worked just as hard at music as she had on her career before. She has been successful and has worked with musicians of note. Carla is said to be collaborating with Lenny Kravitz at this time. She is supposed to be working on two albums, one in English and one in French to be released this year. Despite her marriage to the French President, Carla continues to work hard and with all those planets in Virgo we would expect nothing less from her. She will also appear in an upcoming tribute to David Bowie in May.

Being such a curious cat and such a hard worker with a sense of herself it is no surprise that Carla found in a husband a marriage and a job for she is the first lady of France. At first she took much from the press when marrying Nickolas (his third marriage, her first), but she stood up to the press and became involved in all things French while committing herself to some charities there until the public began to embrace her. Some of Carla’s interests are her charity work; Carla has become involved with helping the homeless, education and those suffering from AIDS, which her own brother died of complications from. Carla keeps up appearances with her husband at state events and we can expect nothing less when looking at all that hard working Virgo coupled with very public and Cardinal Capricorn Sun. Cappy often does its greatest work when older and Carla is showing herself to be a good first lady and gains the confidence of France more and more as she applies herself to her adopted country. With Virgo in the third house and Mars in Aquarius we can imagine that Carla would be interested in people and what ails them so we can also imagine that her heart is in the right place.

Carla’s early fashion profile was one of a hard working model that achieved a great amount in a small amount of time. Her Scorpio helped her wear the revealing clothing and very sexy styles of houses like Versace and the more daring and Aquarius styles of those like Lacriox. She worked well with French designers which are among the most different when it comes to style of any country. She rose to the top with all that hard work and open mindedness along with her ability to wear almost anything. Carla is very tall and thin and looks great in almost anything she wears with her coloring. She was a jackpot for designers looking to show off their most dramatic clothing for she not only liked them but worked hard and had the ability to make them work on her. This lead to great success for her but her mind was bigger than modeling and her social ideas were there so she naturally moved to another area and that was music. Her music look was sexy and full of revealing looks to show off her great body. Along with her work at writing songs and being willing to work with different people in different countries gave her success while being involved in music.

When Carla fell in love with Sarkozy she had to change her style and surely hit the press for what she wore straight from the beginning. Carla started to wear lovely little French suits by designers such as Dior and others and lowered her heels to a sensible height. Her Virgo planets would come in handy here and help her along and she would not mind the change to a bit conservative given her Earthy planets and how many of them she has in her chart. Now we see Carla in dress length coats over dresses, flats or kitten heels and very well taken care of hair in a more natural color and kept up perfectly.

Being that Carla would be a perfectionist, she changed her look quickly after her marriage. The people of France reacted well to her change by accepting her, though they did not at first. Carla has the look at this time of the perfect first lady with an eye on color and France’s use of color and cut to make their statements in design. France has a lot to keep Carla interested when it comes to French designers so she should be happy dressing for her role at this time in her life.

Carla’s life is that of a survivor when we take into consideration her childhood and her hard work in her life. She had to adopt another country, make herself at home there and become successful. Although she came from a “good” family, Carla worked herself and made a name for herself anyway instead of laying low and staying in a position where her family could take care of her. She had ambition (Cappy Sun) and the ability to apply herself and struggle to make herself someone. After becoming a “name” Carla was not satisfied to sit in fame but instead has taken on charities and representing her home away from home, France. She is involved in charity and politics and a Capricorn cannot resist politics in many cases. I believe we have not seen or heard the last of Carla and providing her curiosity doesn’t get the best of her we can expect to see her, in my opinion, grow her role in helping those she can with charity work. She will keep her artistic side going and continue to write and perform songs. Carla has taken a role in a Woody Allen movie, or so the gossip says, so we will see Carla act in the future.