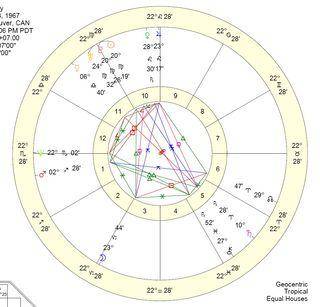 Since we seem to all have love on our minds these days, what is astrology’s take on obsession?

I am not talking about bad pathological obsession but the ones that are beyond mere crushes. They hit you out of nowhere to churn around in your insides until you do something uncharacteristic (and usually embarrassing) or it dies an inevitable death.

I am obsessed with someone that I think I would ‘normally’ not be attracted to. It is an almost otherworldly thing because I am not even sure it’s sexual.

The weirdest thing is I’m not sure I want to do anything about it but instead wait for it to play out because I know there is no way the reality can be as good as the fantasy.

Obsession is a Pluto (Scorpio) ruled thing and your tendency in this direction is shown by the exact conjunction of Pluto with your Sun.

Fantasy is a separate function and ruled by Neptune. You have Venus (relationships) square Neptune which clearly shows a bend in this direction, never mind you are a Virgo in general which leaves Pisces (Neptune) on the 7th house (relationships) and on top of that you have Neptune, BAM on the relationship axis so this is essentially a triple whammy.

Now add to that, Pluto’s position right on top your Sun and the fact you are confused (Neptune) and trying to figure out (Virgo) how you become obsessed (Pluto) with fantasy (Neptune) does not surprise!

As far as your not wanting to actually manifest the thing, I can explain that too. You are old enough to know exactly what you know… that the reality will never live up to what you can dream up and I have certainly played this one myself.

Take any musician on stage… ripe for Venus Neptune to dream (and Pluto to manipulate) the person into whatever and I mean whatever. The last thing you want is for the the guy to come off stage and talk to you! That would ruin everything! What if he farts for Godsakes?

I figured this out when I was 20 years old. I still remember, “Reuben” except I called him Ru-ooh,ooh-ben! Studly Mexican guitar player with dimples and white pants no less. Ha ha ha. I used his energy for 6 weeks back then, never touched or talked to him and I am telling you, I had little choice.