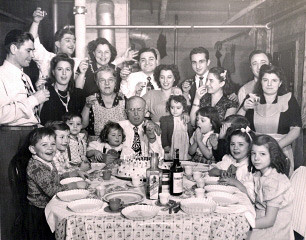 It’s a common phenomena.  The matriarch or the patriarch of a family passes and the family unravels.  I knew a mother who died, leaving her husband and four sons behind.  The men never realized she was what held them together and helped them relate to each other.   When she left the picture each man became an island.

I’ve seen families collapse when the patriarch dies as well.  Whatever the qualities the individual had, there is no one willing or able to step in and replace them or reconfigure the family so it can be sustained and recover from the loss.I don’t think families have to accept this fate as a foregone conclusion.  The falling out can be avoided.

The families who manage this tend to live in reality, meaning they realize their parent(s) are not going to be around forever.  Based on this, they take on increased responsibility as time passes and their parents age.  A younger family member takes over the cooking of the holiday meal, for example.  Another may start making the calls that keep the family in touch and organized.  Basically, they follow the example set by the matriarch or patriarch so the family can endure into the next generation.

We each have a Sun (male) and a Moon (female) in out chart, these are referred to as the “lights”.  You’ll have a very hard time in life if your lights are dim.

Who are the “lights” in your family?  If they pass, is their someone waiting to step up?  Why or why not?