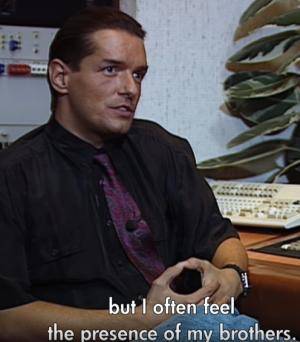 I first wrote about Falco, back in 2008. My husband introduced me to him. He was living in Germany when Falco burst onto the scene. He was fortunate to see him perform live, many times.  He’s really striking.

Today we watched a documentary about his life, Too Young To Die – Falco.  It was interesting, especially from an astrological perspective.

Falco was a Pisces with a Scorpio moon conjunct Neptune. He was the only survivor of a triplets birth.  This is unusual and from what I’ve gathered, every day of his life was like that.  Note the graphic; moon Neptune in Scorpio, he carries the family legacy, which leaks through.

Falco was recognized as a child prodigy and schooled in classical music. This video was my first introduction to his work – Der Kommissar. It looked “Aquarian” to me, mocking communism.  Sure enough, he has Venus, Mercury, Chiron and the Black Moon Lilith conjunct in the sign.

The sunglasses are so Scorpio and he’s so far ahead (and behind) the times.

You can check the lyrics in English here.

But this is what I’m referring to:

“…Hear the children
Don’t turn around, oh oh
Der Kommissar’s in town, oh oh
He’s got the power
And you’re so weak
And you’re frustration will not let you speak…”

I highly recommend the documentary. It’s chock full of interesting tidbits. For example, Falco, used to get drunk as snot before concerts, then have a doctor transfuse his blood.  He nearly died in this process, many times.

You can also ascertain this was not an uncommon thing to do.  One of his friends tell of a time they were in Japan in the middle of this procedure, when they realized they did not have the needed coagulant. No one spoke Japanese which would have hindered their ability to get help, but someone in the hotel recognized what was happening and took the steps necessary to save him. A lyric in one of his songs translates to, “Must I die to live”.

Hopefully that will inspire you to check this this most interesting character. But outside of the documentary, my husband told me of another Falco song that haunts him.

I might mention at this point, my husband also has a moon Neptune conjunction in Scorpio. In whatever case, “Jeanny” is a song about an older man who murder a young girl/woman.  The song is written from the killer’s perspective and the video is… well, you can watch it.

Jeez but he breaks the rules.

If you don’t like dark themes or if you’d rather just be entertained, there’s always this – Rock Me Amadeus. One of Falco’s friends did two of my husband’s tattoos. It’s one of the bikers in this video.

There is one more point to make in this… it might be better presented in it’s own post but it’s, Falco, who said it: “Americans have no irony.” Context here is that he found Americans hard to talk too, due to this lack.

I’m an American, but I believe I understand his meaning. Do you?