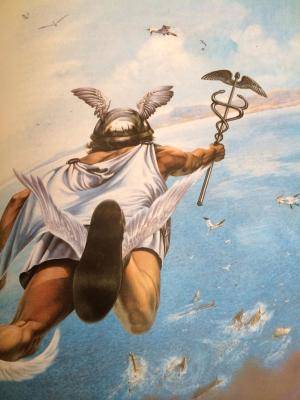 As the messenger of the Sun, Mercury is exalted in Virgo instead of Gemini because Virgo is his ruled sign that is closest to the Sun and his domicile in Leo (Gemini, Mercury’s other ruled sign, borders Cancer which belongs to the Moon). This preference for closeness to the Sun is readily apparent from a geocentric perspective, as Mercury is never more than 28° from the Sun in the zodiac. The planet itself, however, is still circumscribing an entire orbit around the Sun. When Mercury begins its orbital cycle, it is at its inferior conjunction – i.e. the conjunction Mercury makes to the Sun in the zodiac when it is between the Earth and Sun. At this point, Mercury appears from Earth to be retrograde as Earth is actually passing by the slower-moving planet. This is when Mercury shifts from setting after the Sun to rising before him, also sometimes known as Mercury’s Promethean phase. (This is reversed when Mercury makes its superior conjunction – it begins setting after the Sun again in his Epimethean phase. As a point of interest, the inferior conjunction may be related theoretically to the New phase of the Moon, and the superior conjunction to the Full Moon.)

Mercury is a curious planet insofar as it is the only planet to have its exaltation in the same sign it rules. I believe this can be explained by its preference for closeness to the Sun – any strength or ‘lifting up’ of Mercury must, by the planet’s nature, happen in proximity to the Sun. Virgo is the clear choice to represent this – far enough from Leo to avoid combustion & the Sun’s rays (the exact exaltation degree of 15 Virgo makes sense here, as 15° is a standard orb for Sun’s effects), but not back into Cancer, the domicile of the Moon, Mercury’s enemy.

Given Mercury’s dual domicile and exaltation in Virgo, he has both detriment (opposite to domicile) and fall (opposite to exaltation) in Pisces, and additionally is in detriment in Sagittarius, opposite his second domicile of Gemini. Notice that Pisces and Sagittarius are both ruled by Jupiter, meaning that Jupiter will similarly be in detriment in Virgo and Gemini. This natural mutual debilitation of Mercury in Jupiter’s houses and vice versa seems not to be a result of Mercury’s nature, but of Jupiter’s – perhaps Mercury is too earthly and detailed to please ethereal and expansive Jupiter. And, since Mercury is ultra-sensitive to, and even emulates, the behavior of the planets he aspects or who rule him, it makes sense that Mercury will not function well in the sign of a lord who feels enmity toward him.

Mercury, in his domicile and exaltation sign of Virgo, is concerned with the containment and refinement of energy, ideas, organization etc. In Pisces, the sort of boundaries needed for this refinement and organization disappear. This kind of environment can present a challenge to Mercury. Mercury in his domicile of Gemini plays both sides, not wanting to miss anything, the type of traveler who moves side-to-side across the path instead of straight forward. This is in conflict with Jupiter’s expansive, adventure-oriented Sagittarius. Thus Mercury’s full expression may be stifled here, as someone who loves exploring things from every angle may feel at odds with someone who only sees the forest, not the trees.

I hope this article has helped you understand the relationships to the Sun and Jupiter that inform Mercury’s degree of exaltation, detriment, and fall. As we get further into the relationships between planets and sign rulers in this series, it may help you to review this primer. Let me know what other thoughts you’ve been percolating on this topic!