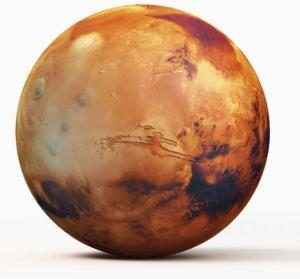 Mars, as a symbol of an aspect of human consciousness, represents our active nature. He is aggressive, doesn’t second-guess, and is associated with both the child and the soldier. These may seem incompatible but they are similar in a very key way: the naïveté and pure faith in self that possesses a child to go out and experiment in the world are precisely the aspects a warrior needs to abandon his earthly cares and fight for something bigger than him.

Mars rules masculine Aries by day, and feminine Scorpio by night, and is exalted in Capricorn. Opposite to his domicile in Aries is Venus-ruled Libra, and opposite to Scorpio is Venus-ruled Taurus – these are the two signs of Mars’s detriment. Mars is in fall in Cancer, opposite his exaltation sign of Capricorn.

Mars, being a masculine planet, prefers his placement in masculine Aries. Here he displays his physical, inexhaustible energy in full force, taking charge of the first sign of the zodiac to get things going. Mars in Aries is like Mars to the power of two: imagine a child alone in a house and able to follow his own whims entirely – great for Mars, but perhaps a challenge to the other houses in the neighborhood. This conquering tendency of Mars is cooled a bit in watery Scorpio, and may reflect the complementary quality to action: reflection. Mars in his house of Scorpio finds a fertile environment to consider actions, think things out, and, in some cases, to prepare the venom for his deadly sting. Scorpio is almost a hibernating house of Mars – we may observe him acting indirectly here, but still as strong as ever. This is not to play into the myth that Mars is malicious, though a poorly-placed Mars can incline the native to come on too strong, pick fights that aren’t worth it, waste energy in pursuits that exhaust him, etc. On the other hand, a strong, well-supported Mars can make the native a strong fighter for a cause that is just, or which aligns with the native’s integrity.

Mars’s exaltation in Saturn-ruled Capricorn can be understood a number of ways. First, we may consider that Mars, the ‘lesser malefic’ is strong under the wing of Saturn, the ‘greater malefic’. So-called malefics exhort the native to earn what the planet represents, contrary to the benefics which require the native to be flexible and receptive to accommodate the gifts they give freely – one must prepare the ground, in a way. The malefics are the way we prepare this ground: they give us the energy and attention to create and revise in order to make the best of the gifts which we are given. This metaphor of preparation is suitable to Mars in Capricorn: the planet of action in this seemingly-barren earth sign gives us the energy to till the field and plant something lasting. Mars in Capricorn may not give the native the brash strength of, say, Aries, but it is necessary for continuing the cycle, and directs our energy toward something lasting (Saturn).

In our article on Venus, we noted that both of her signs of detriment are ruled by Mars; the converse is true here. Mars’s detriment in Libra and Taurus reflects again this crucial difference between the feminine and the masculine in astrology. Venus, representing divine feminine energy, is concerned with peace, finding balance (Libra), and endurance (Taurus), whereas masculine Mars relies on disruption of these in order to accomplish. This disruption is, again, something he has in common with Saturn – Saturn / Kronos creates time through disruption of the harmony of the spheres; Mars creates action in much the same way. Mars in Libra may actually be inclined toward extremes, if the chart doesn’t have a strong Venus to synthesize the energies. Mars in Taurus may be disruptive to the Taurean status quo, which, again, can prove advantageous or disadvantageous to the native, depending on other planetary placements, how well they are able to integrate this Mars energy into their Self, and the influences of those surrounding them.

Finally, Mars’s fall in Cancer reflects an indirectness in Mars’s expression that may be frustrating to him (or the native!). Though Mars and the Moon get on well, the cool feminine nature of Cancer may serve to hide Mars’s natural fiery impulses, and he may be said to approach his goals sidewise, like a crab. This is a very interesting Mars energy and can serve a native very well (there is a lot to be said for indirectness, after all, despite it being a less preferable mode for Mars’s nature). A Mars in Cancer native may give the appearance of being sweet and docile, slow to anger, or even give one the impression of being ineffectual. It would be an enormous mistake to take this assessment at face value, however, for once one penetrates the depths of Cancer, or wears away this tempering influence in the native, Mars comes out swinging and can settle a matter with a single blow. Don’t get on the bad side of a Mars in Cancer native: they are long-suffering and extremely forgiving and accommodating of slights, but if you keep pushing or taking advantage, there will come a day when you see that Mars emerge from the depths, snap a claw, and perhaps take an arm or leg with it.

Do you have Mars in any of these signs? How do you experience it? Do you see a connection between the way you act (Mars) and the condition of the planet ruling the sign he is placed in?