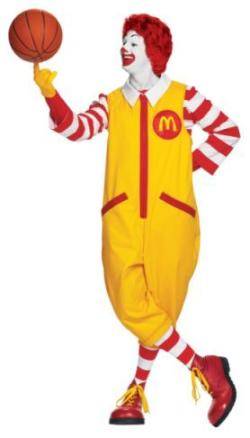 I was talking to my doctor yesterday about what happens to people who go through an extreme trial of some kind and I have been haunted by the memory of a man I knew briefly since. Don’t know why this is era is coming up at this time because the Chief of Police’s son, who I mentioned yesterday was from the same era but anyway, this guy was a clown.

He was an actual clown and an extraordinarily good one because he got to be Ronald McDonald for the region which was something seeing as he lived in the town of about 25 people that neighbored my town of about the same number. So if you imagine that, we were pretty isolated but he’d nailed this big job. If you think they let some Yahoo play Ronald, you’re wrong. This guy was accomplished. And he did magic of course.

I met him one week after he’d been in a catastrophic accident and walked away unscathed. He was in the news in the small town(s) and though I did not see the accident, he showed me the pictures of his (ex) car and we hit it off, in a sibs sort of way.

We started going to lunch and talking on the phone frequently. He was funny and very articulate about what he was going through post that accident. Deeply affected he expressed his emotion and his gratitude at being spared and mostly I listened. I was sort of in awe of him. He was high-minded just so quirky living out where he did. Of course we project our 7th house. I was pretty quirky living out where I did, but whatever.

I had known him about a month when he called me, sobbing to tell me his sister had just committed suicide. What?

Through wracking sobs and emotion he told me he had other calls to make and asked that I please call him in the next day.

Short story shorter, he got real quiet after that. He would call me most nights and I would just be on the phone with him. Sometimes we would just be quiet, other times I would talk into the nothing and he would almost never respond except to let me know he was going to hang up. I was about 26 at the time and I grew increasingly worried about him.

Three weeks or a month after the death, we had this conversation.

“Can you do it? I will come get you. I just want you to… you have not let the house. Come have lunch with me? We can go late so there will be no one there.” I named the restaurant I had in mind. “Come on, it’s hot as hell. It’s cool in that place, we can sit in the back room and tell them to leave us alone. Look, I’m worried about you. Are you even eating?’

“Okay, well today we’re going to eat. Can I come get you?”

A couple hours later I picked up and we went to the deserted restaurant with the tile floors and the brightly painted tables and we sat in the back room. He was in decent spirits though he looked smaller. He told me some jokes and we ordered our lunch and a pitcher of margaritas.

The waitress brought out food and I watched him struggle to eat. Within a minute or so, slow tears started running down his face and I almost gagged. Tears of a clown, see? Do you know the song? I was shaken.

“Let’s get out of here,” I said, making everything go away / paving the way for our escape as quickly as I could.

I drove him home and I never saw him again. He called me a few days later to tell me he was leaving town, see. Because his sister was dead and she lived in the town too. He figured between the accident and his sister’s suicide… well he thought it was a sign.

To this day, I feel bad about dragging him to that restaurant. I took a chance, you know? I gambled and lost and I regret it to this day.

Have you ever been someone’s support when tragedy is fresh? How did you cope? Got Scorpio? 8th House?