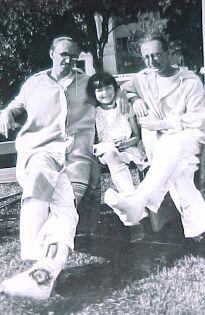 That’s my grandfather, Henry, circa 1923. He’s a double Capricorn with Mars exalted in Capricorn. He also had a stellium in Sagittarius, Mercury, Chiron, Jupiter, Saturn, Uranus and his north node.

He broke his leg and jacked up his knee like that not once but twice while doing stunts on his motorcycle. Consequently he had to limp up mountains for the rest of is life, so he did. He climbed his favorite mountain 127 times and he also ran on that bad leg just because someone told him he never would.

It’s a real Jupiter Saturn story and this is what he said about his knee:

“I guess I shouldn’t have done that. If I’d have just ridden the motorcycle instead of doing tricks I wouldn’t have this limp. And if I’d have learned the first time I broke my leg it wouldn’t be as bad as is it is. But it was just so much fun…”

This is how I feel this morning, as I head off to physical therapy for my back. Sticking my leg up in the air and twisting into a pretzel is just so much fun. I guess you could say we are willing to pay the price for out thrill. It’s a happy (Jupiter) reality (Saturn).

Can anyone with Jupiter in aspect to Saturn, or an emphasis on Sagittarius and Capricorn relate?